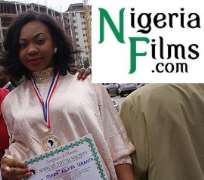 In the past four years,she has waited for only good-girl roles or she will never appear on a movie set,as she rejected any role that will bring her out in bad light.

At her early days in the industry Ms. Uranta who is a daughter of an evangelist, felt that she had a name to protect and detested getting involved in anything that will tarnish that name.

She equally saw playing weird movie roles as one of those things that will destroy her image.

However,Ms. Uranta who has not been appearing in movies regularly as a result of being excessively chosy has broken the jinx and joined other bad babes in Nollywood.

Each time there is any good girl role to play in a movie,I would be the person to be invited to pick up such role.At a point,I said to myself,in case there is no such roles to give to me some day,it means that there wouldn't be any job for me.

Recently, I broke away from that chain, when I acted the role of a school girl as well as a prostitute in a Ghanaian movie entitled,Cold Passion and Real Passion.

People who have seen that movie commended me for a job well done.Some people said they couldn't believe I could interpret the role very well.

Presently, I am doing another job with Stanley Ebonine,it is not like the usual roles I used to play in the past,where producers would cast me as a church girl and lawyer.

Today,I have been able to break away from that chain.It does not mean that I still wouldn't those kind of roles anymore, but I don't want to be stereotyped she stated