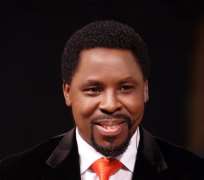 Controversial Nigerian Prophet T.B. Joshua can't seem to stay out of the news. However, this time it's not concerning a prophetic utterance or political visitor…

On Sunday 15thApril 2012, Joshua's popular church in Lagos was witness to a disgusting yet dramatic case of a man with a truly repulsive addiction. Mr Mukaila Malomo, a Nigerian who lived in Germany for 16 years, confessed to being addicted to regularly taking a sickening concoction of faeces, semen and urine.

According to Malomo, a graduate from the London School of Journalism, it all started one night in a prison cell in Germany. "I woke up in the middle of the night and a very wicked demon instructed me to get up from my bed,” he told the bewildered SCOAN congregation. “This strange voice said that I should go to the toilet, defecate and mix it with my sperm and urine. I mixed my urine, sperm and faeces and swallowed everything.”

Malomo, who worked in a reputable organic salad company in Munich before a drunken brawl landed him in prison, explained that an unusual anger and desire to fight immediately followed. “After I swallowed it, a very strange power came over me. I felt as if I was a small god. It overcame me and I became very strong and angry - as if there's an extra power from another world entering my body. I was ready for war. Ever since then, for over 15 years, I have been addicted to eating my faeces, urine and sperm. I can't stop it.”

He continued his sordid tale, explaining how each indulgence in the addiction would result in further violence. “After my release from prison, I was always fighting in Germany. Sometimes, the police would have to cover the whole street to try and stop me - and I was using only a bottle. I kept on stabbing without getting tired – because of this power that entered me.”

People present in the church could scarcely contain their shock as Malomo's revelations continued. “It is not only my own faeces; on many occasions, I visited public toilets here in Nigeria and Germany and ate from there.” He described the mixture as food to him. “I enjoy it. I don't even perceive any smell. I eat it as if I eat eba (Nigerian cuisine) or something like that.”

Malomo, married to a German Hungarian lady who gave birth to his only son while in prison, described how he had kept this addiction a total secret from the world around him. “As I am eating it, that evil spirit will be telling me that this thing is only for me, that nobody should know, otherwise the power will go.”

Joshua proceeded to tell his congregation and the viewers worldwide watching the live broadcast via Christian television station Emmanuel TV that a video clip would be shown to verify Malomo's confession. Stating that it was too graphic for him to witness, he covered his face and advised viewers without strong stomachs to do likewise. The clip showed Malomo mixing his own urine and faeces together and then drinking the revolting contents with apparent ease and delight. People within the auditorium vomited at the sight, distressed at the level of degradation the addiction had rendered on Malomo.

Joshua then called on the congregants to join together in supplication and proceeded to pray for the 'demon' within Malomo to come out! Falling to the floor, Malomo's body began vibrating uncontrollably and uncannily. Asked to explain what was happening, Malomo said he felt as if something was leaving his body.

Joshua then instructed Malomo to go to the church's public toilet to see how his reaction towards human waste had changed following the prayer. Merely perceiving the odour of other's defecation caused Malomo himself to vomit. He returned to the church, testifying that all desire for his former addiction had vanished as the realization of his earlier actions dawned upon him. “Apart from being irritated by the odour, I feel ashamed, in the sense that – how can a human being be eating faeces,” he told the congregation, as he joined Joshua in a joyful dance.

SCOAN has now controversially released the video on popular video-sharing site YouTube and via their Facebook account which has garnered well over 100,000 fans in just four months. Although Malomo's case appears to be the most extreme, many with strange addictions claim to have been delivered at Joshua's ministry over the last few months, including those addicted to drinking kerosene, eating ice cubes, sand, charcoal, mothballs and soil.

T.B. Joshua has set social networks and local media ablaze in recent months, especially with his prediction concerning the death of the late Malawian president Bingu wa Mutharika and revelations of his relationships with African leaders such as Ghana's John Atta Mills, Zimbabwe's Morgan Tsvangarai and Malawi's new head Joyce Banda. His television station Emmanuel TV continues to increase in popularity, especially across Africa where he is becoming a household name.