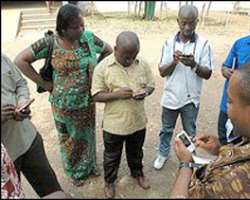 Three foundations have announced their intention to join in a "mobile health" effort to use mobile technology to provide better healthcare worldwide. The UN, Vodafone, and the Rockefeller Foundation's mHealth Alliance aims to unite existing projects to improve healthcare using mobile technology.

The alliance will guide governments, NGOs, and mobile firms on how they can save lives in the developing world.

The partnership is now calling for more members to help in mHealth initiatives.

The groundbreaking "mHealth for Development" study produced by the UN/Vodafone Foundation Partnership lists more than 50 mHealth programmes from around the world, showing the benefits that mobile technology can bring to healthcare provision.

The report also outlines how such programmes offer value to the mobile industry.

That, said UN/Vodafone Foundation Partnership head Claire Thwaites, is a crucial step in an industry that like so many others stands at the edge of a downturn.

"I think there's a real need to have an alliance," Ms Thwaites told the BBC at the Mobile World Congress (MWC) in Barcelona.

"It's looking at scaling up and bringing governments together with NGOs and corporations, and it will commission pretty rigorous research on what the market opportunity is for mHealth, answering the question: why should a business get involved in this area?"

Bringing a "value proposition" to network operators is what could bring together the individual, small-scale efforts that so far have existed as purely humanitarian endeavours.

Andrew Gilbert, European president of Qualcomm, says that his firm has launched 29 different programmes across 19 countries, involving some 200,000 people, as part of its Wireless Reach campaign.

"It's not a charitable thing, it's very much aimed at allowing these solutions to become self-sustaining," he said.

"In India, there are 1m people that die each year purely because they can't get access to basic healthcare," said Dan Warren, director of technology for the GSM Association, the umbrella organisation that hosts the MWC.

"The converse angle to that is that 80% of doctors live in cities, not serving the broader rural communities where 800 million people live."

Simply connecting rural areas with city doctors using mobile broadband would allow the provision of better healthcare to more people, and many of the initiatives to date have focused on that kind of connection.

In 2007, the GSMA supported Ericsson in its Gramjyoti project, providing broadband to the remote Indian villages in the southern state of Tamil Nadu.

A band of paramedics in a mobile broadband-equipped van visited the villages and were able to cover vast areas, referring many queries back to doctors in major cities.  BBC