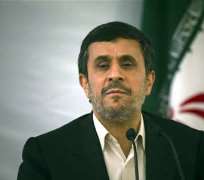 Iran has enough funds to withstand a total embargo on its oil sales for two to three years, Iranian media quoted President Mahmoud Ahmadinejad as saying days before the resumption of talks with world powers on Tehran's nuclear programme.

The European Union is set to impose a total embargo on Iranian crude oil from July following similar measures imposed by the United States to try to force Iran to abandon uranium enrichment.

"We must say to them that we have that much saved that even if we didn't sell oil for two to three years, the country would manage easily," a report on Tuesday from Fars news agency quoted Ahmadinejad as saying during a visit to Hormuzgan province.

The United States and its allies hope the sanctions on Iran's energy and financial sectors will force it to abandon uranium enrichment which they suspect is aimed at developing nuclear weapons. Iran says its goals are entirely peaceful.

Iran is due to resume talks this week with Western countries plus Russia and China on its nuclear programme.

The International Energy Agency recently said that the wide-ranging sanctions against Iran could reduce its oil exports by as much as 1 million barrels per day, or 40 percent, from the middle of the year.

European member states, including Greece, Spain and Italy have been significant customers to Iran and are scrambling to find alternative supplies before the ban is introduced.

"Whoever wishes to abuse Iran's rights, the young people of Hormuzgan will punch them in the mouth to the extent that they won't be able to find their way home," he said.