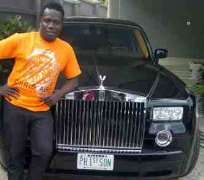 Dancehall music star,Ducan Mighty has parted company with his manager,Blessing whom he once referred to as the brain behind his meteoric rise in the music industry.

The alliance between the once upon a time inseparable duo,we gathered turned sour over the issue of mismanagement.

Duncan Mighty and Blessing have been friends for many years and they have together created the biggest music brand ever in Port Harcourt.Their work relationship could be likened to that which existed between D'Banj and Don Jazzy.

It was learnt that popular Jeweler,Chris Aire who has an endorsement deal with Duncan Mighty allegedly influenced the break-up because Blessing,who manages the prolific singer has allegedly not been up to task in recent times.

Blessing a Port Harcourt big boy owns D'Consiglories Limited,a thriving Branding and Marketing Solution/Event Company with which he has been managing Duncan Mighty before Chris Aire had a deal with Duncan on how to give him international appeal which he has been doing since they signed the deal few months back.

As part of his intention to give him(Duncan Mighty) international face,the stupendously rich jeweler has landed the “Port Harcourt 1st son” a record deal with Dancehall superstar,Shaggy and they have recorded some songs for the international market.

Chris Aire has also used his relationship with top international artistes who he has made jewelry for to arrange collaborations between Duncan Mighty and them.

From a reliable source,Duncan Mighty will be doing collabos with Akon,Lil Wayne,Lady Gaga and few other stars and will be on an international tour any moment from now courtesy of Chris Aire.

The popular jeweler is leaving no stone unturned in order to make Duncan Mighty popular internationally and he's not confortable with the way blessing is handling the career of the “Wene Mighty”.

Before now,Chris Aire and Blessing had a good working relationship until he (Chris Aire) realized that he(Blessing) was not doing his job the way it ought to be done.

From the grapevine,Blessing who was once a Special Adviser to the Rivers State Governor,Chibuike Amaechi,has been paying less attention to Duncan Mighty's career.

Chris Aire who has invested a lot on Duncan Mighty is not pleased with the way Blessing is handling him(Duncan Mighty) and he's planning to bring a lady from the United States of America to take over Blessing's job.

In the meantime, Blessing is focusing on his company while Duncan Mighty who recently moved into his new house has reportedly employed a new manager.