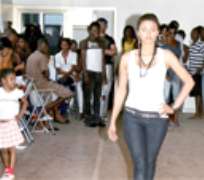 ­­­One of the models in action at Exopa The Exopa Modelling Agency has held a mini graduation for 24 persons who underwent a six-week modelling training at the outfit's newly established school located adjacent the Accra International Trade Fair Centre.

First of its kind, the event precedes a bigger graduation ceremony slated for April next year. Every year the school is expected to hold four different classes for wannabe models. Each class would run for six weeks, after which it would be climaxed with a mini graduation ceremony.

The fourth graduation, however, would be a mass graduation which would bring all the previous graduands together.

Last Saturday's ceremony attracted a number of personalities in the showbiz industry including Ghana's reigning hiplife artiste of the year, Kwaw Kese.

Stressing the need for patronizing modelling, Ibrahim Sima, CEO of Exopa told Beatwaves that learning how to model was not purposely for the runway.

“Learning how to model gives the individual learner the confidence to control themselves in public,” he indicated. He thus encouraged Ghanaians to get trained in modelling.

He used the occasion to elaborate on Exopa's plans for the coming months, saying “in December this year there will be L Fashion week in recognition of fat models who will be strutting on the runway to showcase typical African fabrics.” Auditioning for this event, he noted, is on October 25 at 4pm at the Exopa Modelling Agency premises in Accra.