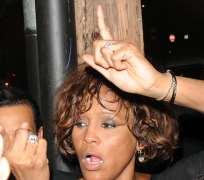 Whitney Houston's years of cocaine abuse led to her tragic death, it was revealed yesterday. The pop icon had cocaine in her system when she drowned in a hotel bathtub, according to the official report released by the Los Angeles Coroner.

She sunk into the bathwater after suffering a massive heart attack caused in part by her prolonged drug abuse. Following the news, Houston's family have released a statement that says: 'We are saddened to learn of the toxicology results, although we are glad to now have closure.'

And her mother Cissy is reported to be 'shocked' to learn that her daughter was still using drugs at the time of her death.