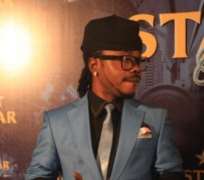 The juicy three-year contract is worth N20 million!

We can authoritatively report that Presh signed the recording contract with Todak Global Productions chairman,Prince Timi issuing him a dummy cheque worth N20 million on Wednesday, March 14,2012.

Presh has put in more than a decade in music.Together with his erstwhile label mate(Kcee),they had five albums and numerous hits songs that brought them fortunate and fame.