IN DELTA, SUCCOUR FOR SPECIAL STUDENTS 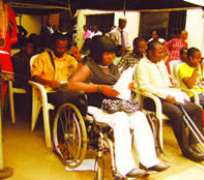 Cross section of the beneficiaries
Mrs. Clara Kwusike, a widow, has two children in Senior Secondary School, one in Junior Secondary School and another in Primary School. She lost her husband who was a Chief Laboratory Scientist at the Government Hospital, Umunede, Delta State in 2007. He died in active service.

The Kwusikes are not alone. Bobby Ugbebor is a 300-Level Chemical Engineering student of the Anambra State University, Awka. His father died in 2006 while in active service as the Chief Accountant, Ministry of Women Affairs, Asaba, Delta State.

Oforitse Edna, a 300-level Computer Science student of the Delta State University, Abraka had measles while just three months old. The injection she was given in the course of treatment deformed her legs and she has continued to live with the disability. Funding her education has not been easy for her and most of those in her category.

Besides, the likes of Bobby and the Kwusikes thought it was all over when the cold hands of death snatched their main benefactors or breadwinners. Paying through school became a Herculean task. But succour came the way of the four Kwusikes - Gift, Fredrick, Treasure and Anthony, Bobby and his sister, Oforitse Edna and 435 others when the Delta State Government presented cheques of various amounts to them as scholarship for the 2010/2011 academic session.

Of the beneficiaries, 343 were children of deceased civil servants drawn from 128 families while the other 99 were the physically-challenged students of Delta State origin across the three levels of education.

N17,144,082.50 was approved and released by the state government to the state Bursary and Scholarship Board for the exercise which is the 20th in the series and it was disbursed to the beneficiaries according to their present level of education. In the category of the children of deceased civil servants, N12,000 was for each primary school pupil, N22,000 each for secondary schools students and N30,000 each for those in higher institutions. For those in the physically-challenged category, primary school pupils got cheques of N20,000 each, secondary school students got N30,000 each and students in higher institutions got N50,000 each.

The state Commissioner for Higher Education, Prof. Hope Eghagha represented Governor Emmanuel Uduaghan at the presentation of cheques ceremony held in Asaba, the state capital. Eghagha said the gesture was another demonstration of the administration's resolve to ensure that brilliant students of the state were not denied the right of education as a result lack of funds for sponsorship.

According to him, the administration has used different forms of scholarships to 'bridge the perceived gap between the 'have and have-not' by giving succour to the physically-challenged students of Delta State origin in schools across the country.

'Scholarship for children of deceased civil servants was introduced to cushion the economic crunch the families of civil servants pass through at the loss of a spouse, who often times are the breadwinners of the home,' he said.

The commissioner said the beneficiaries were 'genuine Delta State indigenes and not children of political loyalists or political party members to score cheap political points,' adding that financial assistance to indigent students was one of the areas the government was deploying the state resources into.

'Every year, the state government spends about N1 billion on various categories of scholarships and bursary to students of the state origin. We have just disbursed about N17 million for this special category of the scheme. About two weeks ago, we disbursed close to N74 million for undergraduates and PhD students. The one for the Masters programme is coming up. We have support for students in the Law schools, we have local scholarships, we have international students' scholarship and we also have scholarship to recipients of first class degree to study to PhD level. If you add the amounts for these various scholarship commitments, you will get up to a billion naira.

'So this is one of the things we do with your money as some people might want to mischievously ask. It is not only building roads or hospitals that is development; investment in human capacity building like we are doing in Delta State is equally a form of development. it is indeed one of the requirements for sustainable growth. Human capital development is one of the three-point agenda of the present administration and we have been doing it like no other state across the federation. I therefore urge to be worthy ambassadors of the state government and correct the misrepresentation in any quarter you find yourself,' he told the beneficiaries.

Eghagha further enjoined the beneficiaries not to see the gesture as their own share of the national cake but to see it as a challenge 'meant to ginger up your spirit in the pursuit of education, integrity, honesty and good character. I encourage you to make judicious use of this financial assistance and justify the high-premium the government attaches to this programme. I implore every beneficiary to live up to the objective of the award in order to guarantee continuity.'

Chairman, Delta State Bursary and Scholarship Board, Rev. Fr. Buchi Aninye said the scheme was intentionally packaged to respond to the educational needs of the children of deceased civil servants who died in active service and the physically-challenged popularly referred to as the 'disadvantaged persons', adding that the tradition has been sustained since the state was created.

Aninye said the board had made significant stride in the continuous delivery of the government financial support services to students in all the categories of the scheme and has thus overcome several challenges in the discharge of the responsibilities.

Justice Ogbodogbo, a 300-Level Pharmacology and Therapeutics physically-challenged student of Delta State University, Abraka described the gesture as awesome and laudable and thanked the government for the assistance.

Oforitse Edna expressed joy at the gesture, saying it was the first time she was being entitled to the gesture. Said she: 'This one now I will use to pay my school fees this session because I don't even have it in the first place.'

Mrs. Clara Kwusike thanked the government on behalf of her four children and assured that the money would be used for the purpose it was designed just as Bobby Ugbebor in his appreciation, prayed God to continue to grant the board the wisdom to pilot the affairs of the scheme.