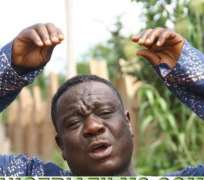 For some observers of trend in Nollywood, John Okafor has become something of a hardened comedian who interprets scripts in his own way—most times to a level that critics have described as 'hilarious imbecility'.

In fact the Enugu state born actor who is popular as Mr. Ibu interprets his role so well that his teeming fans often find it difficult to draw the line between Okafor and the role he plays in movies. Today the former refrigerator technician, hairdresser, factory worker and itinerant photographer has become very successful as an actor.

A devoted disciple of the genre and a gifted humour creator, Mr. Ibu who wandered into acting by chance, has grown immensely popular that his biggest problem now is privacy.

In a recent interview, the Humor Merchant opens up on the alleged conflict between Ghallywood and Nollywood.

I don't support the controversy between Ghanaians and Nollywood, Ghanaians love us. Nigerians who produce in Ghana always offend them by owing Hotels bills, welfare bills and many other attitudes which are bad.

There is one thing with the Ghanaians, they are always straight forward, and due to that they placed a fine of $2000 (dollars) to be paid by a Nigerian producer coming to Ghana to produce a movie. So that at the end of the day if he is not found wanting in any of these offences he will be giving back the money, but on the contrary if he offends the money will be used to settle the debts he owes. If this is the reason why they have to stop acting with us, it's not good, the Ghanaians love us.

Asked, Nigerian films has been generally been criticized for poor production, what do you think is the cause of this; he said We have been encountering so many problems with the in-house I know we can handle them when the attitude comes in; the Nollywood today has not tasted real leadership. Fight quarrels. Please they should allow actors to choose the right leaders.