No Place To Die 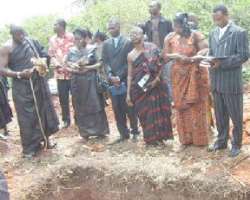 Very soon, people who live in Accra may wake up to the shocking realisation that the persons seated next to them on the trotro bus or in the voters registration queue or are singing choruses with in church are indeed ghosts who, unable to find a resting place, are roaming the length and breadth of the city.

Finding a place to lay one's head has become as difficult for the dead as it is for the living. Especially for the dead, that eternal resting place is quickly running out as city authorities make frantic efforts to find a new site to replace the centuries-old Awudome and Osu cemeteries.

The Osu and Awudome cemeteries built around the 1800s have been overstretched and exhausted far beyond their limits, leaving sextons with no alternative than to adopt what they term a 'storey building burial', where two dead bodies are buried one above the other in one six-foot grave.

The Accra Metropolitan Assembly is now saddled with the responsibility of locating another large piece of land to replace the old cemeteries. In the meantime sextons at the two cemeteries continue to manage a very critical situation, sometimes to the detriment of their health as they reopen graves in which people have already been buried to shift old bodies and make room for new ones.

Even the storey building strategy, according to the Chief Sexton at the Metro Department of the AMA, Alhaji Annan, which the assembly employed to save the situation has not helped as the already used graves are also getting exhausted.

So dire is the situation that, the AMA has requested the Lands Commission to help find an alternative burial site in the Ga district to replace the two cemeteries.

A recent visit to the Awudome Cemetery revealed a very critical situation where this reporter saw some graves that had been reopened by sextons to be used for another burial.

While the main walkway which led mourners into the cemetery had been narrowed to create more space for burial, the inner walkways where bereaved families could use on a visit to the grave sites of loved ones have all been used.

Mr James Aryeetey, Chief Environmental Health Officer at the Metro Health Department of the AMA, said the Assembly had appealed to the Lands Commission for another place to be used as a cemetery since 2005, but they were yet to receive a response.

The Mile Eleven Cemetery at Akwasa in the Ga West District, which was given to the AMA to be used has also been grossly encroached upon leaving just a small parcel of land for the assembly to manage.

The La Community Cemetery which served residents in La and its environs, according to Mr Aryeetey, was also full.

He told this reporter that the department was at the moment managing a very grave situation and there was, therefore, an urgent need to look for a new site.

He explained that although cremation would have been a good option due to the non-availability of land, people were not too interested in that form of burial due to cultural preferences.

Ironically, while the assembly is still trying to find a replacement for the two cemeteries, a lot of burials take place every month.

Talking about the trend of burials, Mr Aryeetey said during the ban on drumming and noise making, a rite observed by Gas in preparation for the Homowo festival, the number of people who buried their dead reduced drastically but the number shot up just after the lifting of the ban.

Frequent burials, he explained took place till December when it subsided and again shot up in January the next year.

Statistics made available indicated that the Awudome cemetery received most burials in the capital. Between January 2007 to December 2007, the Awudome cemetery alone recorded a total of 1702 followed by the Osu cemetery with 785 and La with 568. The number of people cremated within the same period was 43.

Between January and March this year, the department recorded a total of 437 burials at the Awudome and Osu with 167 at the La cemetery.

When she was asked about the new burial arrangements, Auntie Mansa, a resident of Nungua whose relative was recently buried at the Awudome Cemetery answered that “I do not really have a choice, the dead must be buried,”

She was of the view that since burying two people had come about as a result of the shortage of land, it must be accepted as nobody could do anything about it.

On the contrary, Nii Agyiri, a banker whose father was buried recently would not take it that lightly, “How can my father share his grave with a stranger?” he asked. “If anything at all, I expect my dad to be on top so that on judgement day, he can resurrect easily.”