Dust To Dust, Ashes To Ashes 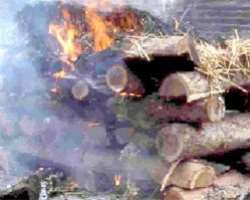 A feeling of satisfaction welled up in Joe Quarcoo last Saturday at the Osu Cemetery in Accra when he saw the fire embrace the pile of fuelwood to begin the process of burning the human body he had placed on the pile to ashes.

Quarcoo, 56, is the Chief Cremationist at the Accra-based Ridge Cremation & Funeral Services and has been a staunch promoter of cremation which his company, set up in 1977, describes as a “safe and hygienic way"of disposing of human bodies.

Cremation is disposing of a corpse by burning. It is an ancient and widespread practice, second only to burial. The burning is done by either placing the body on an open pyre (pile of firewood) or in a gas or electric furnace.

All that remains after cremation are dry bone fragments. Remains with large pieces are put into a machine, the 'cremulator', which grinds them into finer bone fragments somewhat resembling wood-ash in appearance, but of greater density. A specially designed container, called a cremation urn, is used to hold the ashes.

Quarcoo, who has been involved with cremating human remains for 36 years, said some kind of cremation went on in our society sometime ago though that practice differs from what formally pertains now.

“I'm aware that sometime ago, witches, thieves and citizens generally regarded as bad people were tied up and burnt. These days people are cremated based on consent they had given earlier.”

The first crematorium in Ghana was established in 1950 in Cape Coast. It was followed by Takoradi in the 1960s, Accra in 1977, Kumasi in 1993 and Koforidua in 2006. In 1986, the Ghana Cremation Society (GCS) was formed and the various crematoria operate under the society which has a core membership of over 1500.

“We are made up of people from all kinds of religious, professional and ethnic backgrounds,” says Evelyn Addy, a GSC member.

“More people keep enquiring about cremation and I'm sure the number of Ghanaians who would want to be cremated after death is increasing all the time.”

The Encyclopedia of Cremation states that there were 250 cremations in Ghana in 1999. The figure rose to 300 in 2000 and it went up to 335 in 2001. From Quarcoo's estimation, the figures are growing all the time and Ewes form a majority of Ghanaians who prefer to be cremated.

Quarcoo explained that he lived with a Sri Lankan who was a Senior Lecturer in Public Health at the Ghana Medical School and that it was him and an Indian acquaintance who made him (Quarcoo) come to appreciate the benefits of cremation. He is on a crusade now to impart what he knows to as many people as possible.

“I'm a Methodist but I accept invitations to speak at other denominations across the country that want to understand what cremation is about. The pastors, when they grasp the full essence of cremation, pass on the knowledge to their congregation. I believe that is one of the major reasons why more and more people are opting for cremation in this country.”

Quarcoo's website states that cremation “is known to have been practiced by the Greeks as far back as 1500 BC during times of war. They cremated their brave men on the battle field and the ashes were gathered and sent to their homelands for ceremonial entombment.

For those cremated, it was a matter of honour associated with valour and manly virtue. The Romans followed the Greeks and cremated their military heroes.”

People prefer cremation for various reasons. According to Evelyn Addy, for some people it is purely for physical reasons. “They believe land must be available for the living to put to more purposeful uses than just putting a human being in there to decompose.”

For others, cremation is preferred for purely spiritual reasons.