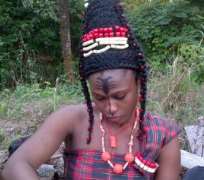 Uche Jombo recuperating from accident on set
By: Ugochukwu Favour-Mayor

In the pix: Patience Ozokwo known as Mama G in one of the scenes with Uche Jombo playing the role of mother and daughter.

Recently, Nollywood sultry actress, Uche Jombo suffered an accident while on the set of the historical movie, Ikenna. The actress dislocated a bone while preparing to film a scene.
The actress who is on set with so many other big shots in the Nollywood industry is said to be recuperating, further confirmation came from the movie director, Amayo Uzo Philips who furthered that she will be off set for a while, in order to allow her injury to heal.

“Well she had a minor sprain in one of her scenes on my set but with it, she shot few scenes which I also I allowed her to get off set to rest her self before the next shoot,” he said.
The movie which its shooting is on in Enugu has Rob Emeka Eze of the Remmy Jes Production as the producer, starring the likes of Kenneth Okonkwo, Patience Ozokwo, Chioma Chukwukah Akpotha, Pete Edochie, Fabian Adibe, Chinwe Owoh and few others.

Uche Jombo is also said to be basking in the euphoria of joining the list of movie producers premiering their movies on the internet as her cinema movie, 'Damage' hits the web. “I am very happy with this new concept and I am very excited about it. It was also borne out of the fact that there is need for us to be internet savvy in this part of the world and it is also a way of showcasing our works to the international community at large”, U J says.

Nigerians should celebrate my dad – Gringory's Son
By: Ugochukwu Favour-Mayor

“I believe my father would not want Nigerians to be downcast. People should celebrate because when he was here, he always said he did his work well. Whenever he looked at the movie industry he was happy about the growth and felt proud because he had an influence in its development”.
Those were the words from Uche the second son of James Iroha, one of Nigeria's veteran comedic actors and creator of the hugely popular satirical comic series, Masquerade. Iroha, popularly called 'Gringory', after his popular character in the rested soap, died at Umuahia (Abia State) hospital in the early hours of Tuesday, February 28, 2012 after a brief illness.
As reactions continued trailing, Chika Okpala, who starred alongside the late Iroha, playing the charismatic character of Zebrudaya in the soap, expressed sadness at the development. “I'm shocked. My last encounter with him about three weeks ago was lively… we worked very well together. He was quite good to me, advised me and we talked from time to time,” he regretted.
Also condoling with the family of the actor and Nigerians on the sad loss through a text message to Fun-Code is the Nigerian ace comedian, Tony Greg Ukaegbu globally known as Prof. Banana Mouth said, “recently, I informed Dede 1 Day of him going blind on our way coming back from a traditional wedding. Now the story came of his death, may his soul rest in peace.”
Praying for his repose, Andy Ike a Nollywood actress added, “He came, he saw, he acted and he took a bow. He will greatly be missed by all lovers of art. May God grant the family the fortitude to bear the great loss,” she prayed.

Following the death of the former Biafran warlord, Dim Chukwuemeka Odumegwu Ojukwu another exceptional tribute has emerged from the debut of the song “Ndi Igbo must hear this tribute: Ojukwu,” a song by Sonex Oguike and his Afro Hi-Jazz Band.

The five tracks album according to the Chief Executive Officer of Musicraft Studio is dedicated to a fallen hero. “It's an Ojukwu tribute, a memorial anthem for Ndi'Igbo. This is my little contribution to the fallen hero who sacrificed all he had for the people. We in the art industry are also immortalizing him with our talents, and I believe it will go a long way”, he said.

Sonex who hails from Umuaka in Orlu Local Government Area of Imo State won the award of best creative highlife musician in 2007 by the Opinion research analysts, extolled Ndi'Igbo at home and Diaspora to promote the song which he proposed of being an Ojukwu anthem.

A legal battle over copyright claims seem to be brewing between popular Nigerian VAS company, MTECH and the management of popular singer, Waconzy, DV8 Media, over claims of unpaid royalties to the singer by the company.
In a press release made available recently, DV8 media stated that royalty proceeds from the 'I Celebrate' album by Waconzy were being withheld by MTECH, who they claim have profited immensely from the sale of the singer's tunes.
According to the statement, “It's been over 6months (two quarters) and yet not even a kobo has been paid to dv8 media and instead of giving the real figures of caller tunes hits, MTECH decided to send a fraudulent report excluding the hits from (communications networks) Etisalat, Airtel and Starcomms claiming they that don't have any record from the other telecommunications companies”.
“DV8 media is a law abiding company and we are getting ready to take the matter to court. The money in question is not our primary concern. However this is a fight for justice and sanity in the caller tune business. We also advise Telecoms Company to withdraw the license of MTECH as they are a fraudulent company. We also advice artistes and record label owners not to work with such companies”.
However, in a swift response, MTech debunked claims made by Waconzy's reps, saying that due to the artiste being signed to another content provider, the earlier agreement reached between both parties subsequently became void.
“Yes (DV8) did indeed come to MTech Communications to sign Waconzy's music to be used as caller ring back tones via MTech's relationship with operators. However, on sending his agreement to the operators for verification and upload, an investigation was carried out and we were informed by MTN that Waconzy was already signed exclusively to another content provider through this same DV8 media and due to this, his contract with us became null & void and the operator refused to upload his tones under MTech. We have not defrauded DV8 media and Waconzy is not signed to us,” an MTech spokesperson said.