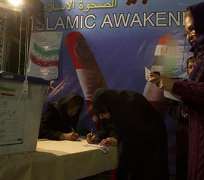 Iran, under intense Western pressure over its disputed nuclear program, on Saturday declared an initial turnout of 64 percent in a parliamentary election shunned by most reformists as a sham.

Iran's Islamic clerical leadership is eager to restore the damage to its legitimacy caused by the violent crushing of eight months of street protests after President Mahmoud Ahmadinejad was re-elected in a 2009 vote his opponents said was rigged.

Supreme Leader Ayatollah Ali Khamenei, who endorsed the 2009 result, has since turned sharply against Ahmadinejad. Some early results from Friday's vote suggested the divisive president's supporters were losing ground in the 290-seat parliament.

His sister, Parvin Ahmadinejad, failed to win a seat in their hometown of Garmsar, the semi-official Mehr news agency said. Elsewhere, Khamenei loyalists appeared to be doing well.

Interior Minister Mostafa Mohammad Najjar put the turnout at 64 percent after more than 26 million votes had been counted, telling state television the Iranian nation had disappointed its enemies by voting in such numbers.

The figure was close to the 65 percent predicted for weeks by hardline conservative leaders and media.

Najjar said 135 seats had been won outright so far, with 10 going to a run-off. Final results were not expected on Saturday.

According to a Reuters tally of the results announced in 126 seats, 81 went to Khamenei supporters, 9 to Ahmadinejad's faction, 7 to reformists and 7 to independents, with the allegiance of the remaining winners unclear.

The results are hard to compare with the outgoing parliament because hardline Khamenei and Ahmadinejad loyalists were united in the 2008 elections, taking about 70 percent of seats.

Results declared so far were mostly from rural areas, Ahmadinejad's traditional strongholds. Khamenei's candidates were expected to do well in Tehran and other big cities.

Khamenei, 72, had called for a high turnout to send a message of defiance to "the arrogant powers bullying us."

British Foreign Secretary William Hague said Iran's election was not free or fair. "The regime has presented the vote as a test of loyalty, rather than an opportunity for people freely to choose their own representatives," he said.

No independent observers were on hand to monitor the voting or check the official turnout figures. An unelected Guardian Council, which vets all candidates, barred 35 sitting MPs from seeking re-election and nearly 2,000 other would-be candidates.

The vote took place without the two main opposition leaders. Mirhossein Mousavi and Mehdi Karoubi, who ran for president in 2009, have been under house arrest for more than a year.

BEATING WAR DRUMS
Iran has been hard hit by Western sanctions over its refusal to halt sensitive nuclear activity and be transparent with U.N. nuclear inspectors. Israel, whose leader meets U.S. President Barack Obama on Monday, has talked of war.

Obama also said military action was among the options to prevent Iran acquiring nuclear weapons. "As president of the United States, I don't bluff," he told Atlantic Magazine. But he also argued against a pre-emptive Israeli strike.

The dispute over Iran's uranium enrichment program, which Tehran says is purely peaceful, barely featured in an election dominated by debates over soaring prices and scarce jobs.

The vote will have scant impact on Iran's foreign or nuclear policies, in which Khamenei already has the final say, but could strengthen the Supreme Leader's hand before a presidential vote next year. Ahmadinejad, 56, cannot run for a third term.

The outgoing parliament has summoned him to answer questions next week about his handling of the economy in unprecedented hearings that could hamstring him for the rest of his term.

But the combative Ahmadinejad may try to turn the tables on his critics, some of whom say he has inflicted higher inflation on Iranians by slashing food and fuel subsidies and replacing them with cash handouts of about $38 a month per person.

Global oil prices have spiked to 10-month highs on tensions between the West and Iran, OPEC's second biggest crude producer.

Israeli Prime Minister Benjamin Netanyahu said on Friday global powers would be falling into a trap if they pursued talks with Iran, saying Tehran would use dialogue to deceive the world and buy time to advance its nuclear program.

Netanyahu will press Obama, who is facing a presidential election in November, to stress publicly the nuclear "red lines" that Iran must not cross, Israeli officials say.