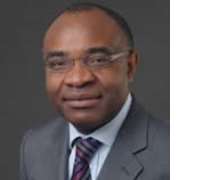 The drums were rolled out recently in Enugu for an outstanding medical expert from the state that bagged a rare recognition in far away London, United Kingdom, as he made the prestigious Power List, containing Britain's most influential blacks.

Prof. Stanley Okolo, who hails from Ezeagu in Enugu State, is presently the Medical Executive Director and Consultant Obstetrician & Gynecologist at the North Middlesex University Hospital, London. He is also a Professor of Obstetrics & Gynecology of the UK Faculty, St Georges International School of Medicine, Grenada. Okolo remains the first Nigerian and first black medical director of an acute university hospital in London. He made the list of the influential blacks in the United Kingdom.

The 2011 Power-list, compiled by a high-powered panel chaired by the United Nations Under Secretary-General for Humanitarian Affairs, Baroness Amos, featured business leaders, entrepreneurs and people from the arts, media, science and engineering.

Only one footballer appeared on the list, Rio Ferdinand, former captain of the Engllish team. Also, engineers, investment bankers, lawyers, entrepreneurs and even a consultant orthopaedic surgeon featured in the high-class, glossy publication.

Others are Vivian Hunt, a Director with illustrious management consulting firm, McKinsey & Company and Trevor Faure, the Global General Counsel at Ernst & Young. Vivian Hunt is joined by two other women in the top 10: Tandy Anderson, the Co-Founder and Chief Executive of first-rate model agency Select Models and MP Diana Abbott, the Shadow Minister for Public Health and the first ever-black woman to be elected to Parliament.

Formula One motor racing driver Lewis Hamilton is the youngest Power-listed in the top, while famed Architect David Adjaye and well-respected Barrister Courtenay Griffiths equally made the list.

Also, Ken Olisa, CEO of Restoration Partners, Non-Executive Director of Thomson Reuters and Chair of the Power-list Foundation as well as Private Equity Baron Damon Buffini also made the list.

The Power-list is published by Powerful Media in partnership with investment bank JP Morgan; with Thomson Reuters as the media sponsor.

According to the Chief Executive Officer of the Powerful Media Ltd, Michael Eboda: 'The Power-list offers a view of black British society that few are aware exists. People often ask whether we could have a Barack Obama, the answer is, if we did, that person would probably come from the Power-list.

'It is often said that there is a lack of black role models, the Power-list shows this to be patently untrue. It's a publication that should be made available to as many young people as possible because it is really important for them to see people like them, from backgrounds similar to theirs who have achieved at the highest level.'

Thus friends of Prof Okolo gathered at the exclusive Enugu Sports Club to celebrate one of their own who had made the people of Enugu state and indeed the entire south east proud.

Governor Sullivan Chime at the event praised the doggedness of Okolo who he noted had made enormous contributions to the development of the state as he had annually dispatched medical teams from the United Kingdom to offer free medical services to communities in the state.

'Time has indeed come for us to celebrate one of our own and that's exactly why I'm here. The caliber of people present at this function goes to show the high esteem we hold Prof Okolo who has made us proud. By making the Power List in the United Kingdom has proven that something good can come from the blacks.

'I understand that before one gets on the Power-list, such a person must satisfy the real definition of influence -'the ability to alter events and change lives' - at the highest level. Over the years, it has become increasingly difficult to get on this list because the caliber of those who make it has continued to shift upwards. Nowadays, unless a person is leading the organization they represent, it will be very difficult to make the cut.

So, we are excited that an Enugu man; an exceptional Enugu son and indeed son of Igbo land has made the list and we are proud of you,' the governor noted.

Also speaking, a former Secretary to Enugu State Government and Chairman of Auto-Star Travels, Chief Onyemuche Nnamani said the recognition of Okolo in far away Britain goes to show that Nigeria is blessed with enormous human and material resources that 'if properly utilized' would go a long way in affecting lives positively across the globe.

'The Power-list profiles 100 people of African, Caribbean or African American heritage who either live in Britain or are British citizens living anywhere in the world. This people are expected to have made invaluable contributions to human lives in one way or the other. Having made the list, it shows that our own Okolo has become a global personality and we are proud of him.'

Other speakers at the gathering eulogized Okolo for the honour and urged him to further extend his medical prowess to his home-state, Enugu as that would go a long way in changing the healthcare delivery status of the state.

Responding, Prof Okolo whose wife is presently the Special Adviser to the Enugu State Governor on Health said he was overwhelmed and humbled by the show of affection, support and brotherly love by the people of Enugu state and south east zone.

'I was particularly touched at the impromptu nature of the reception and the fact that so many people turned up within 10-12 hours of being notified by the organizers, including His Excellency who was returning to the state that day after over a week away

State indigene and a Nigerian,' he said.
'I will be very keen to deploy my knowledge, skills and experience to the task of nation building because whatever one's achievements to date, my continuing burning ambition is to continue to give something back to the under-privileged in Nigeria and other world countries, and to touch and transform lives by adding value to our collective endeavours in whatever sphere of life I find myself on returning fully'.

Speaking on the healthcare delivery status of Nigeria compared to what obtains in the United Kingdom; the UK-based medical expert said 'there is a world of difference mainly due to consistency of rigorous adherence to established standards, high professional ethics, robust health systems and value for money investments in healthcare. In Nigeria, whilst there are many excellent doctors and hospitals, the vast majority of our healthcare is not immune from society's pervading culture of tolerating mediocrity and impunity.

'There is malpractice everywhere in the world but what are the personal and professional consequences for the doctor in Nigeria of malpractice, negligence or acting beyond one's competence? In the UK, you may lose your license and/or go to jail plus you will certainly face significant opprobrium from the profession. There is also a striking paucity of clinical and corporate governance structures in many health institutions, not to mention the continuing difficulty obtaining accurate data on our health indices such as births, deaths, causes of deaths and morbidity data. Finally, we need strong and experienced leadership to deliver on several of the blueprints that have already been discussed regarding the Nigerian healthcare sector.

Remember that education and degrees cannot substitute for practical experience of leading a major healthcare organization in a highly developed healthcare system like the UK', he noted.

He expressed hope that despite the myriads of challenges confronting the nation's healthcare delivery, the country could still achieve the Millennium Development Goals as they affect healthcare, noting that 'we must refocus on primary health care, tackling the social determinants of health such as education and gender rights, and being courageous enough to appoint and support the right calibre of people to advise, lead and further develop the strategies for achieving the MDGs.

'Some of these may be peculiar to Nigeria, such as vastly enhancing the status of community health workers, empowering nurses and midwives to prescribe drugs and perform minor procedures within strict guidelines and oversight, and releasing the boundaries