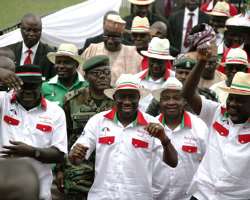 In a campaign speech at the U.J. Esuene Stadium rally ground, President Jonathan urged voters to return Imoke as Governor of the Cross River State because of his “good works.”

GEJ described Imoke as a unifier and good candidate that will continue to make Cross River State the envy of all other states.

Imoke is seeking to return to as governor of Cross River State and has chosen his erstwhile deputy, Efiok Cobham as running mate.

They are tipped to win the governorship election slated for Saturday with at least 70 percent of the votes cast because of their popularity in the state.