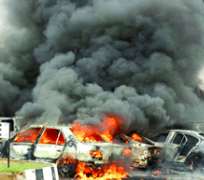 Worshippers at a Christ Embassy Church in Suleja, Niger State, yesterday outsmarted suspected Boko Haram members who planted an Improvised Explosive Device (IED) near the church located on Morocco Street in the town.

Apparently acting in self-defence, and to avert a repeat of the carnage of the Christmas Day bombing at St Theresa Catholic Church in Madalla, Niger State, of which Boko Haram claimed responsibility, the Pastor, Uyi Idugboe instructed the members to move inside the church located on Morocco Street, prior to the arrival of security operatives and bomb experts.

By the time the bomb went off 25 minutes after, it left in its trail, confusion and panic. Five persons including members of Triumphant Ministries sustained injuries in the blast, which also shattered six vehicles. The injured were taken to Suleja General Hospital.

The Boko Haram sect later claimed responsibility for the Madalla bombing in which 44 people were killed.

Idugboe told Daily Sun that there were few casualties on Sunday as the church security had discovered what resembled a bomb during checks on cars outside the church and were able to rush the people inside for protection.

His words: 'My head of security alerted me. He said he noticed something in a sack, a cylindrical stuff with two wires. So I called the police,' he said.

'So, 25 minutes before the detonation, we already knew. So we asked everybody to go inside the church. That is why we don't really have casualties.' According to the Assistant Pastor, Live Favour Bible Church, Pastor Sunday Ochai, the hoodlums may have targeted the cluster of churches in the compound, which also housed the Triumphant Ministries and Christ Embassy Church. He said the bomb was abandoned in a cellophane bag and placed between two vehicles whose owners were worshiping in the church.

The pastor said he also observed that people suspected the bag because some wires stuck out from it. But before they could alert the police, the device went off. The two vehicles were badly shattered as well as those parked nearby. Another eyewitness also told Daily Sun that the perpetrators of the bomb blast might have been targeted at the Igbo Community Office, which is also close to the place. The office was unaffected even as there was nobody there when the incident occurred.

Mrs Edith Eze, who said the explosion, which occurred in front of her shop around 10 a.m., also destroyed five vehicles belonging to members of the Divine Favour Ministry. Niger State Commissioner of Police, Mr. Ibrahim Meshanu, who was one of the early callers at the venue, confirmed that five persons were injured and two were in critical condition. The commissioner who led a team of policemen to the area said no arrest had been made but investigations had since commenced. The street had since been cordoned off by soldiers even as the residents of the area were now living in fear as they were seen peeping from their windows and doors.

Also speaking, an officer of the Nigerian Security and Civil Defence Corps (NSCDC), who pleaded anonymity, said the explosion occurred during a church service in the morning and injured five persons including a child who were rushed to the Suleja General Hospital. Dr. Okoye Chukwudi, a medical doctor at the Suleja General Hospital, said the victims were responding to treatment.

He, however, said one person with serious injuries had been transferred to the University of Abuja Teaching Hospital in Gwagwalada. One of the victims, Malam Nasiru Yusuf, said he was standing close to the church when some people shouted 'bomb blast', adding that he later found himself in the hospital. Reacting to the situation, Alhaji Yunusa Adamu, the chairman, Suleja Local Government Area, said the government would fish out the perpetrators of the dastardly act and bring them to book.

The National Emergency Management Agency (NEMA) officials who rushed to the scene of the blast however warned the general public against trooping to the scene of the explosion for safety measures. Meanwhile, the Federal Capital Territory (FCT) Police Command has beefed up security within Abuja and its environs, with the deployment of more personnel on patrol and to guard designated critical facilities and other strategic areas.

FCT police spokesman, Superintendent Jimoh Moshood who confirmed that all the entry and exit points into the Territory have been fortified, while more police personnel have been deployed to patrol and protect lives and property on the highways, major roads, streets, and strategic locations in the FCT.

He urged members of the public to go about their lawful activities without fear, but admonished them to report suspicious movements or incidents to the nearest police station. Such reports, he added, could also be made through mobile telephone numbers 08032003913 and 08061581938.