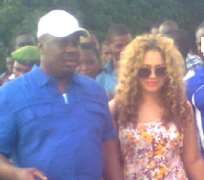 The last may not have been heard about the love affair between Ghanaian star actress,Nadia Buari and Delta State big boy politician and oil and gas turk, Chief Joseph Tubodei Penawou.

The duo seemed to have moved their relationship to the next level.

Recall that we brought a report to you few weeks back about husband snatching saga allegedly involving Nadia and ex-Miss Delta Soap Queen,Steph-Nora Anusionwu.

According to the gist,Nadia had been having an illicit affair with the man who is legally married to Steph-Nora.As the gist had it,Nora lives in London with her husband,Tomowu and their three kids,but Tomowu's business in Oil and Gas and politics,had made him to stay more in Nigeria recently.

When in Nigeria,the Big Boy shuttles between Asaba in Delta State and Lagos.He was said to have met Nadia in Asaba during the shooting of a film and one thing led to another.

Ever since then, the duo have been neck-deep in the affair,which later led to the gists getting to Nora in London and had opened a fierce battle between the ex-beauty queen and Nadia.The issue had already resulted in a messy war,especially from friends of Nora on the social media,Facebook and Twitter most especially.

With the latest development,it seems the controversial actress doesn't give a hoot about the whole issue.

According to source,we learnt she just might make Nigeria her second home because of her illicit affair with Joseph Temowu.

They are said to attend events hosted by friends together.

He is said to spare no cost in lavishing attentions on the object of his desire.

We gathered that the top politician has been spoiling Nadia with cash and gifts.

Close source revealed that the Top Politician is currently having top fun with the actress who is permanently lodged in his mansion in Asaba and often accompanies him to Lagos and Abuja on business.

Nadia has been seen painting the town red with exotic cars.

She was at Silverbird Galleria in the evening of Sunday,January 22,2012.She came in a red Kia car(EF 650 GGE).

Further findings revealed that Joseph Temowu has told those close to him that he would take Nadia as his wife.

The big question now is why is it that female celebrities have penchant for getting hitched to men who are already married to someone else?