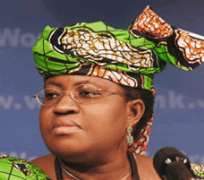 The much-expected Youth Enterprise with Innovation in Nigeria (YOUWIN) programme, yesterday, took effect with the Federal Government officially signing a Memorandum of Understanding (MoU) with participating banks and other organizations.

The programme, which is expected to engage about 360,000 Nigerian youths with existing business innovative ideas will be supported by the Federal Government who is ready to develop their businesses and entrepreneurial skills for the next three years.

Recall that the YOUWIN programme was launched by President Goodluck Jonathan in October 2011 with the objective of assisting aspiring young entrepreneurs under the age of 40 years to start and grow their own businesses and even employ others.

The Minister of Finance and Co-ordinating  Minister of the Economy Okonjo-Iweala who signed  on behalf of the Federal Government in Abuja said: 'This is a programme of the Federal Government which is spearheaded by the Ministries of Finance, Youth Development and that of Communication Techno logy with some partners and supporters from the World Bank, DFID and other private companies like Julius Berger Nigeria PLC, Pan African University Business Development programme, a UK -based University, SMEDAN and BOI'.

Others include, the First Bank, Stanbic IBTC, Access Bank, adding that up to 360,000 Nigerian youths with existing business ideas will be supported under the programme. 'We hope to support these young entrepreneurs to create between 80,000 and 10,000 jobs in the economy, the idea is that instead of waiting to be employed, we want to grow their business where they have high Innovative ideas and then be able to employ others,' she said.

She noted  that presently, government is expecting to start with about 1,200 young people. According to her, twenty four thousand  Nigerian youths applied for the first phase of the completion and over 500 Nigerian youths from the Diaspora  also applied. Out of this number,  the best 6,000  of them were selected based on merit.

She explained that those of them that finally succeeded in the final phase were subjected to trainings to develop their business plans for the second stage, assuring  that by the end of February 2012, it is hoped that out of the 6000, about 1200 final winners  will be selected.