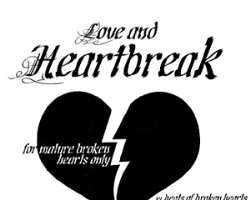 It is really sad the way people feel when their hearts are broken. From all indications people suffer from an emotional or physical loss of another person to the extent in which they began to ache and hurt inside. This is called having a broken heart, more commonly called Heartbreak.

Lots of things can cause heartbreak. Some people might have had a romantic relationship that ended before they were ready. Others might have strong feelings for someone who doesn't feel the same way. Or maybe a person feels sad or angry when a close friend moves out of their life. Although the causes may be different, the feeling of loss is the same — whether it's the loss of something real or the loss of something you only hoped for. People describe heartbreak as a feeling of heaviness, emptiness, and sadness.

It is said that more men attempt and /or commit suicide when they have broken hearts .But before they do that, they first try to kill the lady who broke their heart. I do agree with this argument as I believe we have all been witnesses to similar issues in Ghana .Example is the issue which happened at the University Of Cape Coast where a student killed himself after killing his girlfriend who left him for another man. Another case was about the bodyguard at the Osu Castle who suspected his girlfriend of having an affair with another man during the Valentine's Day.

For the ladies, I hear they have more people to talk to when they are affected, their hairdressers, aunties, taxi drivers, friends on campus and at home. But what I also heard is that even though ladies may get over it, they never get over comparing themselves to the woman the guy ends up with.

Describing the feeling of a broken heart is almost impossible to explain to someone who has not already experienced it. But those who have will tell you, it is not easy.

According to most people, it is an unpleasant ache from the core of the body making you wish for the past, when you had what it was that broke your heart. It is the feeling that it is not worth getting out of bed in the morning for fear of the pain. It is untreatable. It is the only emotionally related syndrome which has no definite cure, some psychologists say time is the best cure whilst doctors say that there is no cure for an emotionally broken heart. For some their first love is critical to them and getting over it is incredibly difficult. This is because we all think our first, real, wonderful, romantic love will last forever. Funnily enough, it has not always been the same I visited a friend at Kaneshie who had just recovered from a brokenheart. In fact she has been with this guy for over six (6) years. She told me what hurts her was her time, money and energy that has been wasted. One other issue was that, it was this guy who broke her virginity and to make matters worse, she had also aborted two (2) pregnancies during their relationship.

Kwesi, who also suffered a broken heart told me instead of concentrating on his books, he was always with the girl, chilling at night clubs and other places. He also used his school fees and student loans to buy gifts for the girl. He said “Charles, what didn't I do for this girl? I wanted her to be happy, but she broke my heart” He mentioned that, it was God who helped him out even though he nearly failed his final examinations at the University.

Another lady also mentioned that they have been together for a long time and recently discovered he(boyfriend) was calling and talking to another woman for hours several times a day and talking less and less to her. When she asked him, he said he likes talking to her and nothing was happening. When she called this lady, she said she liked talking to him and nothing was going on. Her man was really angry when he got to know she had called the lady. She told him she did what she had to do because he would not tell her anything and she was getting hurt. He sends her money. Her text messages to him were "Hi baby, I miss U. When can I see you? I love you more than anything on earth" “I always enjoy everything we do together” “you are special” etc. This ended their relationship and could you believe this same lady is going out with the man? Her heart was broken.

These are just examples of what some people are going through. And I believe there are a lot of people out there who need some kind of help to mend their broken hearts. Below are some points I gathered from some few experienced adults and I believe you might want to consider them:

From Auntie Julie: With your friends, you need to let them know what comments are helpful and what are not. "If a friend says, 'He didn't deserve you' or 'I always thought she was a cheat,' it means they weren't honest at the time. No one knows what goes on between two people. Such comments are usually not helpful. Each half of the couple has to accept half the blame when talking about the breakup.

Also, friends can help you get over it. They may ask you to come out in a group to the cinema or the party or whatever. At first you won't be in the mood, but soon you'll realize that there are some bonuses to being single again. In fact, you'll find that this is a good time to do stuff that you didn't do with your ex. So now you can go to the sorts of films that you like, or you can listen to your type of music.

From Auntie Gloria: You can feel so bad after your heart is broken that you feel seriously ill, or as if you have been in hell. So, treat yourself as if you are recovering from a bad illness. Let other people care for you. Get as much sleep as possible. Eat good and lovely foods and allow yourself to cry. It's horrible at the time, but you'll feel better afterwards. All in all, take life gently - you've had a shock, and your mind and body need time to get over it.

From Auntie Josephine: Create distance between you and your ex. One thing that is so difficult about this is no longer having another person around, no longer having your best friend and confidant. It is difficult to let go of the everyday interactions and the friendship. And yet, if you are to heal well, you must create distance between you and your ex. This will give you the opportunity to grieve and work through your situation.

Uncle Ebenezer: Sometimes when our hearts are broken we want to find someone new to love us as soon as possible. This is natural - but unwise. Your best bet is to embrace your single life wholeheartedly for six months or so. Obviously you may end up having sex with other people - but do make sure it's safe sex. However, your emotions are not going to settle for quite a while, so have fun, but don't go looking for anything else serious until you're happy without your ex. You'll know you're getting over your heartache when you can get through a whole day without thinking about them.

Some people feel that nothing will make them happy again and resort to alcohol or drugs. Others feel angry and want to hurt themselves or someone else. People who drink, do drugs, or cut themselves to escape from the reality of a loss may think they are numbing their pain, but the feeling is only temporary. They're not really dealing with the pain, only masking it, which makes all their feelings build up inside and prolongs the sadness.

Therefore, be patient and enjoy life to the fullest. Remember to pray and know you are special to God.