TV VIEWERS SAY PORTRAYAL OF AGE IS ‘NOT A PRIORITY’ 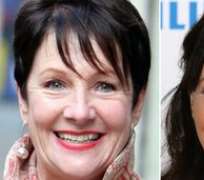 TV viewers are largely satisfied with the portrayal of different age ranges in the media, a study by the Creative Diversity Network (CDN) has found.

Just 17% of those surveyed expressed mild dissatisfaction with how the media deals with age in general.

It follows the case of Miriam O'Reilly, who successfully sued the BBC for age discrimination after she was dropped as a presenter on Countryfile.

The report said age portrayal was less of a priority than quality programmes.

However, it showed some concern across all age groups about the lack of middle and older aged women on television.

Director general of the BBC Mark Thompson said broadcasters should take note of any dissatisfaction expressed by viewers.

“There are lessons here for the BBC and the rest of Britain's broadcasters,” he said.

“We should also note the concern, expressed by older people generally, about the need for greater visibility for older women,” Mr Thompson said.

“While, of course, there are many older women presenters and actors across our airwaves, this is something that needs to be addressed.”

'Unexpected'
The findings suggested that young people were more concerned than the older generation about how they were portrayed on TV.

In the poll, 40% of 16 to 24-year-olds said they did not agree with the way their age group was represented in the media.

The report said: “Although there is perceived to be plenty of coverage of young people on television, much of this portrayal is viewed as unduly negative.”

It said that young people are often seen to be involved in “risky behaviours” and are shown to have a “disrespectful nature”.

However, the authors suggested that the timing of the poll, which was conducted around the time of the London riots last year, may have influenced young people's responses.

The BBC's media correspondent Torin Douglas said: “After all the headlines about Miriam O'Reilly and the lack of older women on TV, it's unexpected to find that it's young people who are most concerned about the way they are portrayed.

“And most people aren't that concerned at all – the report says only 17% of those questioned were dissatisfied with the way the media deals with age.”

The Creative Diversity Network comprises of several media outlets, including the BBC, ITV, ITN and Channel 4.

The BBC is the current chair of the body, and had championed research into ageism when it took on the role.