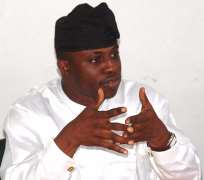 An Abuja High Court this afternoon cleared former Speaker of the House of Representatives, Dimeji Bankole, and his former deputy, Bayero Nafada, of corruption charge.

According to the Judge, Justice Suleiman Belgore, both Dimeji and Nafada had no case to answer in connection with the N40 billion misapropriation charge and the 17 count charge brought against them by Economic and Financial Crimes Commission (EFCC).

Dimeji and Nafada were charged to court by EFCC for misappropiation of fund to the tune of N40billion. They were also accused of approaving loans not covered in 2010 Appropiation Act.