A THREAT GREATER THAN BOKO HARAM 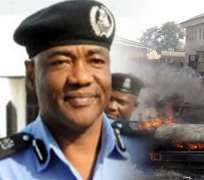 Last week, President Goodluck Jonathan extended the charade that is Nigeria’s feeble, failing fight against anarchy by replacing Inspector General of Police Hafiz Ringim with a new man named M.D. Abubakar. Mr. Ringim’s rustication, and the hiring of Mr. Abubakar, came in the wake of a series of gruesome bomb attacks – in Madalla and Kano – by Boko Haram, a terrorist group whose anti-Western rant is surpassed in ferocity by its death-dealing.

If the move to fire Ringim and hire Abubakar was meant to indicate a new, firm resolve to square off against Boko Haram, the orchestration fell flat on its face. From the outset, Mr. Abubakar’s headship of the police was freighted with far from reassuring controversy.

No sooner was his appointment announced than several groups rose to question his suitability. It is now widely known that the Justice Niki Tobi commission that investigated a bloody sectarian flare-up in Jos in 2001 concluded that the new IG woefully shirked his duties – to say the least. The commission asserted that Mr. Abubakar, who was the Commissioner of Police in Plateau State at the time of the bloody feud between Muslims and Christians, received the most “scathing comments” in memoranda.

Numerous witnesses at the commission accused Mr. Abubakar of being “responsible…for causing the crisis or failing to curtail its severity or extent.” The commission found the testimonies compelling. It stated: “The inability of the police to handle the situation resulted largely from the poor handling of the crisis by…Abubakar at whose doorstep the blame must be laid.” The Tobi panel stated that, in the build-up to the bloodbath, as tensions rose, the then commissioner of police continued to mislead the state government with a “false sense of security that turned out to be fatal.” The commission concluded that Mr. Abubakar was “guilty of, at best, gross negligence and at worst, sheer incompetence.”

And the foregoing represented the commission’s milder rebuke. Turning up its rhetoric, Justice Tobi and other commissioners contended that the former state police chief – now inspector general – apparently lent advantage to the Muslim combatants when he, a, reassigned some divisional police officers as the crisis simmered, b, withdrew vehicles that would have given certain police units greater mobility to reach besieged areas, and, c, shielded mosques from attack whilst leaving churches unprotected and vulnerable to the incendiary rage of Muslims. The commission suggested that Mr. Abubakar retire from the police, or be compelled to leave.

It may well be that the Tobi Commission did a huge injustice to a stellar officer, but the public has no evidence that this is the case. Was President Jonathan unaware of the cloud over the new IG when he picked the man to head an embattled, inept, demoralized and deeply corrupt police? If the president knew of the Tobi strictures, did it not seem to him pertinent that such a freighted past had to be addressed, an explanation offered to Nigerians? If Mr. Abubakar’s role in the 2001 Jos crisis was beyond reproach, the onus is now on him – and on President Jonathan as well – to put Nigerians’ apprehensions about the new IG’s record to rest.

But the matter of Mr. Abubakar’s culpability in the Jos conflagration aside, it should be stipulated that the state of affairs in Nigeria simply does not conduce to an effective tackling of Boko Haram. A sturdy campaign against the militant group would demand more than a cosmetic gesture, far more than a mere change of guards. And that, in the end, is what the swapping of Abubakar for Ringim represents.

Boko Haram’s audacity, its ability to have its violent way – taking the war to the military, the police, the SSS etc – bespeaks a fundamental malaise in Nigeria. In fact, the group is, at best, a symptom of a debilitating, horrific disease: a space that for fifty years had laid unfounded, unproven, quite fraudulent claims to being a nation. Boko Haram’s gratuitous deployment of violence is, in a profound sense, a proclamation of the hollowness of the Nigerian “nation.”

It would be a mistake, I suggest, to perceive Boko Haram as an entity sworn to nullify or erase the Nigerian nation. That’s the official line – and lie – that the machinery of the Nigerian state delights in propagating. You can’t expunge what doesn’t exist; and Nigeria, as a viable nation, does not exist. Instead, one sees Boko Haram as a violent organism spawned in part by a deceptive claim. Were Nigeria not a lie sustained since British fiat cobbled it together, it would be difficult for a monster like Boko Haram to take root here.

Truth be told, the British did not leave us a nation; at best, they bequeathed a shell to us. Yes, we had the option to take the shell and mould it into whatever we chose, including a vibrant national community. Such an undertaking would have demanded volition and commitment on the part of all of us. Rather than embrace that creative challenge, we carried on as if mere word of mouth sufficed to translate a space into a national community. But a nation, any real nation, is more than the sum of its politicians’ speeches. A nation built on sheer political rhetoric, but no corresponding positive acts, can be no more than a pathetic pretender. We are caught, all of us, in the cauldron of that willful contradiction.

Those Nigerians who occupy one political office or another are most vociferous in invoking the Nigerian “nation.” They are the most liable to vend the falsehood that Nigeria’s identity as a nation is a settled question. The reason is not farfetched; it is naked self-interest. Their lips locked on the trough, they stood – and stand – to suck and suck from Nigeria’s resources. These men and women cleave to the romance of shepherding a nation when, in fact, all they do is liberally and greedily help themselves to the common harvest. Experts in the art of dispossession and the science of gluttony, they frequently marshal the police, the military and the SSS to fend off the hordes of Nigerians to enable them to gorge undisturbed.

The protesters who crowded the streets of Nigerian cities and towns in January had finally seen through the game. Or – since they have long been aware of the game – they had finally found the proper idiom to express their disgust. Unafraid to speak, they called the so-called chieftains by their proper names: thieftains. They realized that many of the ostensible leaders are, at bottom, terrorists whose greed has caused far more misery and deaths than Boko Haram’s bombs. To the extent that they saw beyond their oppressors’ facile efforts to sow seeds of ethnic suspicion in order to split the resistance, they began to imagine a different, inspirited Nigeria.

A space can’t lay serious claims to being a nation when patent criminals are hardly prosecuted and never jailed, but – as Wole Soyinka reminded us recently – are turbaned or regaled with chieftaincy titles and other insignia of honor. We can’t be a nation when elections are turned into selection fests in which voters have no say; judges routinely sell their verdicts to the highest bidder; legislators compete with the executive in devising looting schemes; corrupt governors and presidents are shielded by the constitution; connected politicians and office holders contrive to snatch the barest meals from the mouths of the wretched of the Nigerian earth but treat themselves and their own families to opulent escapades complete with private jets and carousals on foreign beaches; one Nigerian is grudgingly handed a monthly minimum wage of $120 while another – called a governor – carts away $2.2 million each month in a scam called security vote.

My Endorsement For Igbo Leader?
Last week, a certain Omunekokwu Eze wrote a piece published in at least two newspapers and titled “Who will step into Ojukwu’s shoes?” The writer quoted me as praising Governor Peter Obi of Anambra for taking extraordinary care of the late Ikemba Nnewi. I want to assure my readers that the said words ascribed to me were never mine. I am appalled that Mr. Eze would credit me with words I never wrote and sentiments I don’t hold. I find the whole exercise sickening.