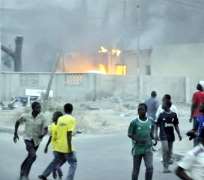 Suspected members of a radical Islamist sect attacked a police station in this north Nigeria city where its coordinated assaults last week killed at least 185 people. Youths overran the bombed station Wednesday and blood and investigative files covered the floor.

Gunmen likely from the sect known as Boko Haram surrounded the police station Tuesday night in the Sheka neighborhood of the sprawling city of Kano, witnesses said. The gunmen then ordered civilians at shops and homes surrounding the station to get off the street, then began chanting "God is great" as they threw locally made bombs into the station, and sprayed assault weapon fire into the building, witnesses said.

Wednesday morning, the jail cells of the station stood open, as blood coated the floor of the local commander's private bathroom. Investigative files apparently rifled through covered the floors, as youths outside waved an officer's uniform.

A crowd of cheering youths jumped up and down on top of a burned-out police truck, with one wearing a police ballistic helmet, smiling. Others in the crowd said in the local Hausa language they would kill any police officer who returned, as some asked journalists visiting the site if they were Christians.

"We are not satisfied with what is happening now," said 26-year-old Abubakar Muawuya. Our leaders "have to call this Boko Haram and sit down with them."

Kano state police spokesman Magaji Musa Majiya did not immediately respond to a request for comment Wednesday morning. No one immediately claimed responsibility for the attack, though it followed the pattern of others carried out by Boko Haram, including the use of improvised explosives.

The sect, whose name means "Western education is sacrilege" in Hausa, claimed the attack Friday in Kano that killed at least 185 people in the country's second-largest city.

Boko Haram wants to implement strict Shariah law and avenge the deaths of Muslims in communal violence across Nigeria, a multiethnic nation of more than 160 million people split largely into a Christian south and Muslim north.

While the sect has begun targeting Christians in the north, the majority of those killed Friday appeared to be Muslim, officials said.