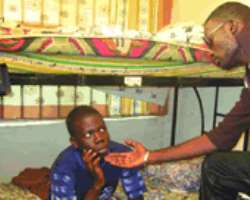 While the film was directed by Mike Bamiloye of the Mount Zion Film Productions, the Director of Photography was Kayode Alao, with some other production assistants from Mount Zion Films.

While Fiwajomi is a brilliant young boy from the village and had the opportunity to continue his university education in the city, he is caught up with the temptations of the university which makes him lose his original purpose and God-ordained destiny for his life.

Wuraola, on the other hand, is a young beautiful lady with a proud future and a humble background. She is the daughter of a widower who loves her so much with a passion. She too leaves her father's house to face the reality of the campus life. Fawojomi forgets his father's candid admonitions and gets entangled with wrong group of friends; while Wuraola gets broken down by a fake student lover. One is blessed with a second chance, while the other goes too far and loses the only opportunity. The film gives a strong warning to all students in the higher institutions not to toy with their God-ordained destiny.

The cast of the film comprises both the students and some of the faculty staff of the Bowen including the entire chaplaincy of the institution like Rev. Mrs. Janet Oluwoye (as Fiwajomi's Mother); Rev. Kunle Popoola (as Fiwajomi's Father), Pastor Mrs. Peace Babatunde and Pastor Akinwale Akinsola (as Wuraola's Father). They also served as the Associate Producers for the movie.

Among the staff of the university who played lead roles are Mr. Biola Akinola, Bowen's Director of Works, who acted as Uncle James; Mr. Victor Ayansina who played Lecturer and Rev. Dr. Oyadiran Emmanuel of the Music Department who conducted the University Mass Choir for the main background music of the movie.

The entire cast of the disciplinary committee scene was acted by almost all the actual Disciplinary Committee members of the Bowen University headed by Dr. Tunde Lawal and Rev.. Mrs Olaniyi, and shot inside the Senate Room of the campus.
A night before the commencement of the shooting, the production crew, producer, Damilola and all the associate producers paid a courtesy visit to the Vice Chancellor, Prof. Timothy Olagbemiro, for briefings and blessing.

“The co-operative conduct of the students was amazing. The casts and crew were left alone working on sets without any disturbance from the students; during day or night exterior shots, they gathered quietly watching the director drilling the casts and calling the shots. No distractions whatsoever. The cast was also very humble and co-operative on set.

They humbly passed through the tedious drilling of film shooting on set. Nothing and no one was spared, they were sternly handled like the Nollywood actors and actresses not minding that they are students who found the rudiment of film shooting very strange.” Fiwajomi will be released within the first quarter of 2010 by the Chaplaincy of Bowen University. It is, indeed, a university film project