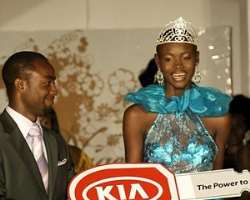 The Head Marketing Dana Motors says his company did not release the Kia Picanto car that Cynthia was supposed to have won because Okorodudu's agency could not pay for it. He speaks with ADA ONYEMA Your company is one of the sponsors of Nigeria's Next Super Model context… Yes.

In 2008, Cynthia Omorodion won. But she says a year after her prize, a Kia Picanto, has not been given to her…

Last year, the car was not bought because the agency did not fulfil its own side of the agreement.

We exchanged mails and stated the terms and conditions, which the two parties agreed on.

That was fulfilling our side of the agreement. We agreed that we would give the car at an XYZ discount and price in anticipation that the organisers would fulfill their side. Unfortunately, they did not meet the terms. It's so sad that people will say a thing and would not fulfill it.

Did you at any time reduce the discount you gave on the car?

Did you try to find out why the organisers did not fulfil their part of the deal?

I'm not in conspiracy with anybody. Ours was to meet our own side of the bargain. If the agency chose not to meet its, that is its own problem, not ours. This year, they met the terms and bought a car for the winner. If we did not meet our side of the contract, we would not have sold the car at the rate we did.