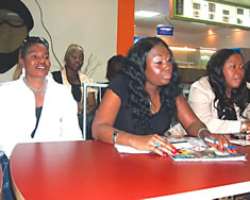 When Delta State governor, Mr. Emmanuel Uduaghan, changed the theme of the state from the big heart to the finger of God, little did he know that he was courting the support of all Nigerian female artistes, especially those from state.

A few days after the governor announced the change, the female artistes, led by Lady Judith, popular musician and 2nd Vice President of PMAN fame, dropped a theme song for the state–– a rendition, which touched the heart of the governor.

So, for the love of Deltans, female artistes from the state have perfected a concert tagged: 'Going back to my roots', which they plan to unleash on the governor and dignitaries as well as people of the state and their friends come December 26 at the Mom Civic Centre in Warri.

The event, which promises to be a night of great fun, relaxation, comedy and enjoyment with a glamorous dress code, will feature traditional dances, comedy by Mandy, social networking and great performances from Branama, Queen Keffe, Ese Agesse, Stella Monye, Essence, Brisibe, Stella Damasus, Omawunmi, among others.

According to Lady Judith, who disclosed this to entertainment reporters in Lagos on Wednesday, “we see this as the beginning of good things for the state. It is a way of telling the governor that we are in support of his good works. Though we may be scattered around the country, we can contribute in our own way to help build the state.”