Nigeria Civil War through the Lens 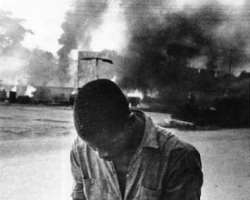 There was division, hatred, unhealthy rivalry, and pronounced disparity in development. The growth of nationalism in the society and the subsequent emergence of political parties were based on ethnic/tribal rather than national interests, and therefore had no unifying effect on the people against the colonial master.
The Nigerian Civil War broke out on July 6, 1967 and ended on January 15, 1970. The war was the culmination of an uneasy peace and stability that had plagued the nation from independence in 1960. This situation had its genesis in the geography, history, culture and demography of Nigeria.

After the eastern region voted and seceded from Nigeria On May 30, 1967, the war had not reached an irreparable level according to history, the first gunshot of the war busted in July of 1967. Within that period, Federal troops where only shipped eastward to implement police measures but clashed with Biafran resistant on several occasions a situation that would have been brought under control within the year.

Sunny Ache's research evidence shows that the situation got out of control after President Bongo of Garbon made a horrible comment provoking the Biafrans against Nigerian government. This comment was made after he attended another conference in Paris. His comments were indistinguishable from the words of General Charles De Gaulle (the then French President) when he heatedly and openly opposed the Nigerian.

Ache, the writer and Co-director of “Unbreakable Nation” told THISDAY his main reason for writing “Unbreakable Nation”. “It is not just to talk about the war only the negative way, but also in a positive light and to also tell our pre independence history correctly not as documented by the westerners omitting their faults on the cause of the crises we face.
So much information is not included as to the cause of the war. I confidently want to disclose to every Nigerian that we have hated each other unnecessarily and clashing with the opposite tribes over political issues wrongly. We are making ourselves laughing stock to the westerner's world when we disclose our grievances on tribal grounds and reasons for the past war and present revolutions around the Niger Delta areas and the North were we encounter endless and shameful religious and ethnic clashes.

The enemy is neither within us nor in Nigeria. We should know that, Nigerians did not cause the civil war, the French indirectly did and with Unbreakable Nation, Ache promised to prove it.
My research through “Unbreakable Nation” will expose the top secret, unofficial movement of the French government in the second year of the regime of General Charles De Gaulle a man who always talked about this history.
A year before Nigeria's independence, he directly appointed Pierre Messmer as Minister of Armies, another man with broad knowledge on Nigeria's promising economy after oil was discovered in 1953 while serving as French appointed governor general of Cameroun. They took advantage of the clashes to indirectly to fuel the confusion that lead to the secession war an act that would help keep the British oil companies Shell-Bp off the south to enable the French gain total access to the oil in the south.

They also supplied arms to the Biafrans and through the President of Garbon aggravated their leaders more to fight for secession when the British was busy offering diplomatic support to the Nigerian government and trying hard to end the war after advising General Y. Gowon on abolishment of regions in order to create states to favour every Nigerian tribe and maintain peace. The French support for the Biafra was cut halfway and denied when they realised the federal troop gained the upper hand.

If it was not for the French false hope to the Biafrans, the war would have not lasted that long and most of the Igbos killed would be alive today. “Unbreakable Nation” will bring all this facts to life and to warn Nigerians that if we engage ourselves in another war, another western nation would be glad to see us go down for them to have easy access to our oil, because that is all they care about not lives.