My man must be an exceptional lover----Nnenna Agba 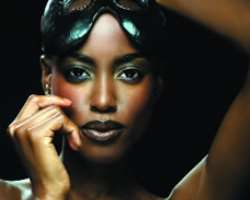 Nnenna Agba is not just another pretty face, she is a dogged, down to earth and intelligent lady who studied Chemistry at Texas A&M University. Her rise to fame is her appearance as a contestant on Tyra Banks' reality show, America's Next Top Model reality show cycle 6. Although she was voted out of the show, her career couldn't be stopped because she had made her mark as a top model.
Nnenna was born in Houston, Texas but returned to Nigeria and spent 12 years before going back to the States where she currently resides.

Speaking with a strong Ibo accent that people often wonder if she is an American citizen, Nnenna is proud of her African roots and would do anything to defend it. Her unfortunate eviction from the show did not impede her ambition to be a model as she has graced various runways, she was in a recent spread in Essence and at present, works for O Model management which is headed by super-model-turned-fashion-icon, Oluchi Onweagba-Orlandi. Speaking with us recently in a telephone interview, the model who confessed to not having a fantastic childhood reveals that her dream man would be an exceptional lover and generous at the same time.

How and when did you start modelling?
I started modeling when I was in College. During the summers, I would try to find Modeling conventions, events, or local competitions to participate in. After I graduated from College, I signed with a local agency in Houston Texas and continued to model part time while maintaining a full time job as an Analytical Chemist. It was fun doing both jobs but it was very demanding.

What informed your interest in modelling?
My interest in modeling began in the early '90s as I watched and read of people like Iman, Naomi Campbell, and Tyra Banks on television and in magazines. My admiration for them grew into a desire (to be a model) that far exceeds moderation. I went into modeling with the confidence that I could be anything I wish without giving room for failure or the thoughts of it a chance.

What was growing up like for you?
Growing up for me felt very rapid. I was hardworking as a child, always the my mom called if she needed an errand to be run efficiently and I was always the one that didn't mind tidying up after my siblings. I would say I am a hardworking person who doesn't give room for laziness or tardiness.

What position are you in the family?
I am the second oldest of five girls my mom gave birth to.

What were your early challenges as a model?
The early challenges that confronted me in modeling was the difficulty of getting your foot in the door and getting agencies to accept you when they have limited spots and requests for black models.

How did you surmount those challenges?
I dealt with them by finding what makes me unique from everyone else and showing the agents that they don't have a girl like me. Whether it's my smile, my intelligence, my facial features; I simply polished what set me apart from other Models.

Did you feel bad when you were evicted?
When I was evicted, I was relieved because I was ready to retire from being watched on camera 24/7 and I had an opportunity to stay in Thailand (where the elimination took place) for two weeks, site seeing, shopping, resting, dinning, going from Spa to Spa.

Which was your best modeling moment?
I feel like my best modeling moment is always the job I did last because it is still fresh on my mind. I have done several Fashion Weeks in New York, Paris, and London. I have flown to different countries for amazing photo shoots with great photographers. My lastest photo shoot was a fashion editorial story just yesterday in NYC for Essence magazine which comes out in March.

Any worst modeling moment?
My worst moment in modeling is yet to happen and when it does, it might be time for me to find another job. I believe something good always comes out of a bad situation.

What was the biggest modeling contract you got?
My biggest contract that I have landed so far is the ability to represent the Face of African descends. Laughs.

Any regrets in modeling?
I have no regrets in modeling because I enjoy it, I am happy to go to work, and I can pay my bills with something I love doing. The most exciting aspect of doing what you love is the inner joy and calm it brings you, you are fulfilled doing it, it is anot a struggle.

How do you relax?
For fun, I hang out with someone I love, I read, I watch silly TV shows at times (e.g. Punk'd with Ashton Kutcher), movies and talk on the phone with friends and family.

Are you seriously considering marriage?
That is a personal question and I won't answer that because it is my little secret. I will get married at the right time whether I am considering it seriously or not.

Who is your dream man?
My dream man is funny with a witty sense of humor, intelligent, patient, extremely kind, cautious to hygiene (both personal and environmental), generous, hardworking, handsome, exceptional lover and “family man” potential.

Who are your role models?
My role model is anyone who is a genuine humanitarian because they inspire me to give back to others who are less fortunate.

Who is Nnenna Agba?
I see myself as a chameleon because I am someone who can strive and succeed in numerous aspects and settings in life.

Background
I attended Texas A&M University in College Station Texas, where I studied Chemistry. I was a member of the ROTC (Military) programme called the Corps of Cadets for two years. I did fit well with my fellow Chemists back in school, I also got along with my fellow cadets while we trained together and now I am hanging with models and an individual from either one of the three groups will describe me similarly but in different terms. However, I am still the same girl except I change clothes and wear them well.