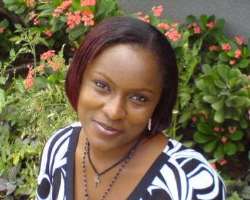 Actress Caroline Johnson, who was down with Acute Lymphoblastic Leukemia (Cancer of the blood), and received overwhelming support before, during and after her operation in India, has died.

The mother of three, who acted as Uju in popular Christian soap 'Heaven's Gate', passed on at 5:30PM yesterday (Wednesday December 16), after suffering a relapse.

Her husband Tony told www.nollywoodgists.com early this morning that his wife was 'very okay' until last Saturday when she 'suddenly took ill'.

”It started again on Saturday. By Sunday she was unconscious. We had taken her to the hospital (St Mary's hospital in Omole, Lagos) where she was transfused and revived”

”She was bleeding from her mouth and nose and under the skin” Mr Johnson told www.nollywoodgists.com.

Caroline was placed on artificial Oxygen.

By Tuesday she got really better, her husband says. ”They were planning to discharge her on Thursday (today), and i even told her i'll get her a wheelchair so we can go to the Redemption Camp”.

”Unfortunately, she broke down again on Wednesday morning”.

”She was tired”, Tony says, telling www.nollywoodgists.com that her last statement was: ”I have finished the Book”.

Before leaving for India, Caroline Johnson went through endless chemotherapy and blood transfusions at the Lagos University Teaching Hospital (LASUTH).

Her illness was diagnosed in October 2008 – she was at the time, five months pregnant with her third child (whom she gave birth to, prematurely, on December 17, 2008).

She is survived by her husband Tony (they were married for seven years), and their three kids: Omolayo, Imisioluwa and Oluwatise (who clocks 1 today)