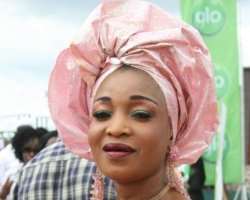 As an actress, Nike Peller came into the limelight in the nineties with the movies: 'Iyawo Alhaji' and 'Adun'. She is the daughter of a great magician, the late Prof. Abiola Peller. In this interview with RONKE KEHINDE, Nike talks about life on and off the screen and how she's planning to pick up her father's magic wand.

We've not been seeing your face on the screen for sometime. What have been up to lately?

I wasn't in town for a very long time. I went to the United States. I just came back recently. Acting is my job, I'm not running away from it. Aside from that, I'm a costumier, I also have generators that I rent out to artistes on locations. I have two buses I rent out for locations. I came back with a lot of goods pertaining to location purposes; be it outfits, anything that has to do with locations.

So you're currently working off camera, on locations?

Yes, somehow. Now I'm a producer myself and I'm working on my project. Anytime I'm ready, I'll come out in full force. If I'm ready to go on location tomorrow my people are there to assist me.

Being a daughter of a great magician, you grew up to know magic and you also performed magic. Why don't you focus on magic, don't you think your father's legacies are fading out?

We are working on it because we will soon get back on stage fully. I really don't want to say much about it now. But the time is set to come. People used to ask us, me and my siblings that 'are you not going into magic?', 'Do you want the magic to die like that?' I told people that I can't just do it all alone. It has to be with family members who know so much about it. Thank God we are working on it now and we are going back on stage fully, soon.

While growing up, what were lifw goals?

I kept telling people that artistes need to be submissive. As an artiste a lot of things will come your way, you need to endure. You don't allow stardom to get into your head, if not one will misbehave.

When I was in school, I was in Akure Institute of Technology in 1987. I was there with my brother. There was this man named Baby Love who happens to be a friend to my brother and the late Alade Muyideen Aromire. I was going to school one day when Baby Love and Mr. Taiye Matidi called me. They said they wanted me to come and have few roles with them. I told them I wouldn't be chanced unless if they could put it at weekends. They said OK and they came to my house on weekends. They asked me to come along with some costumes. They gave me a script. I went there. I worked with them.

That was the first film I shot with them. The movie is 'Aiye Lu'. After that I came to Lagos in 1989. But in June 1993, I was in my house at Bode Thomas Road in Onipanu. Alade Aromire came to my house with his wife then. He asked, 'Nike, what are you doing?' I said nothing; that I was still looking up to God. He said I should come to Odunfa in Ebute Metta, that I should come with some costumes. I went there, I acted with them and that was the film that brought me fame. The name of the film is 'Adun'. Although I've acted with Baba Sala before in Mosebolatan because Daddy acted with them. Some shots were taken at Onipanu and Ibadan. I was just part of the crowd. Baba Sala used to be a family friend, so was the late Afolayan and the late I Show Pepper. We were one great family then.

Being a popular actress, you must have had some embarrassing moments with fans?

Fans sometimes make someone to get annoyed, especially the area boys, instead of them to ask for your autographs or to just embrace you or take pictures with you like they do in civilized countries. No, they will be asking you for money. If you give them what you have, they will tell you that this is not our money, this is too small. They even task you in some cases, that you should give so so amount. They will end up embarrassing you. Whereas in advanced countries, fans give out gifts to stars and celebrities. But in Nigeria it's a different thing entirely.

Which one of the movies you acted in brought you into the limelight?

The first one is 'Adun' and also 'Iyawo Alhaji', which was the first movie Alhaji King Wasiu Ayinde acted in. It was 1995. Maybe due to the parade of stars in that movie, it did shoot me into the limelight.

How do you cope with male admirers?

You have to handle that in a civilized way. An artiste has invited the public into her life. If they say I like you, it's okay but when they are going further to get my contact, I'll tell them I'm married. That's a no go area. You are my fan you should remain my fan. It's not everybody that comes to you that wants to date you. I've come in contact with some people that will say I'll like you to meet my wife and my children. Some will even call their home in my presence and say I've seen Nike Peller that you wanted to meet.

Who is your great influence in the industry?

When I was young I always looked up to Baba Ogunde, Iya Rainbow and Baba Ojo Ladipo, Efunsetan Aniwura, Baba Bello, Jide Kosoko and even Emma Malini the Indian woman who was a great influence.

Right now who is your influence in the industry?

I have so many like Joke Silva, Mama Gee and so many of them.

Have you ever encountered sexual harassment in the course of your duty?

Not really because when I started I was invited by professionals. Not that I was desperate to become an actress. It's when you are desperate that you start seeing all these rubbish. I was not oppressed or harassed in any way. I've come a long way now, I'm a director and also a producer. I have my own company in my own little way. I know the in, and out of the industry. I didn't take acting as a do or die affair.

Share with us a memorable day in your life.

The day I was given a visa to come and take award in London was very memorable to me. I felt that for them to invite me for an award it shows that they admire and appreciate what I was doing. We have a lot of people around that they didn't honour. I was just called that come your Visa is ready, come and take it, you are traveling in so so time. That was about six years back.

How many people were invited from Nigeria to take the award?

We were 20 from Nigeria. Ten from English movies and ten from Yoruba movies.

Talking about your style, are you a designer freak? Do you buy clothes because they're designers?

I go for what suits me. Being a designer myself, I went to a fashion school, so I design most of my clothes myself. I combine my clothes by myself. I don't go for designers.

Out of all your jobs which one do you find most challenging?

I will say 'Iyawo Alhaji' because the story, the producer, the director, the cast, everything about the movie is classy. I'll say it's one of the best movies in Nigeria so far.

They should expect a lot. I'm working on my movie. I shot some in the US, some in Holy land. I've been trying to package everything and by the grace of God when we finish the whole shooting in Nigeria, it will be out.

I started my primary school education in Oyo State, Ansarudeen Primary School. I left for Ondo State, where I started my Secondary School education. I was there for two years when I left for Iseyin, I finished my secondary school at Aduwaya Grammar School in 1986. In 1987 I left for Akure Institute of Technology. I read Computer Science. After that I came to Lagos, I went to Singer Fashion School before I finally joined Alade Aromire Theatre Group

I'm an easy going person. I don't like to hurt people. I don't want to be hurt. I'm a very shy person, but people don't know that.