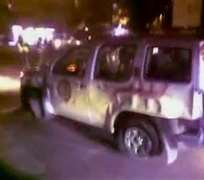 Syrian President Bashar al-Assad vowed on Tuesday to strike "terrorists" with an iron fist and derided Arab League efforts to halt violence in a 10-month-old revolt against his rule.

The president's 100-minute speech, his first public address since June, contained some promises of reform, but no sweeping concessions that might placate an opposition now determined to end more than four decades of domination by the Assad family.

Assad, 46, offered a referendum on a new constitution in March before a multi-party parliamentary election that has been much postponed. Under the present constitution, Assad's Baath party is designated as "the leader of the state and society."

But the Syrian leader gave no sign that he was willing to relinquish the power he inherited on his father's death in 2000.

"I am not someone who abandons responsibility," he declared.

In the latest bloodshed, Syrian forces shot dead 10 people, most of them anti-Assad protesters, in the eastern city of Deir al-Zor, the opposition Syrian Observatory for Human Rights said. Gunfire from a checkpoint also killed a man in Homs, it added.

Authorities have barred most independent media from Syria, making it hard to verify accounts by activists or officials.

Assad made scathing remarks about the Arab League, which has sent monitors to check Syria's compliance with an Arab peace plan after suspending it from the 22-member body in November.

"The Arab League has failed for six decades to take a position in the Arab interest," he taunted.

MONITORS ASSAULTED
The League condemned an attack on Monday in which 11 of its monitors were hurt by demonstrators in the port city of Latakia, saying Syria had breached its obligation to protect them.

Internet footage appeared to show a pro-Assad crowd in Latakia surging around the white vehicles used by monitors.

"Unfortunately there have been attacks on monitors, especially those from (Gulf) countries, attacks from non-opposition elements," said the foreign minister of the United Arab Emirates, Sheikh Abdullah bin Zayed al-Nahayan.

"The task of the monitors is getting more difficult every day because we do not see a decline in ... killings," he said.

Syria said it was continuing to provide security for the observers and condemned any act that obstructs their work.

While opting to keep the mission going at least until January 19, the League said on Sunday Syria had not fully implemented an agreement to stop violence, withdraw troops from cities, free prisoners, provide media access and open a political dialogue.

Opposition figures say the monitors have failed to stem the bloodshed, but Russia, an old ally of Assad's government, said on Tuesday the mission had a stabilizing role.

Assad complained that Syria was the target of a relentless foreign media campaign. Blaming unrest on "outside planning," he said: "The outside now regrettably includes Arabs."

His approach to unrest, casting it as a foreign conspiracy and countering it with violent repression and hazy promises of reform, resembled that of other Arab leaders confronted by mass protests in the past year. Three autocrats have been toppled.

ARMY TO MAINTAIN COHERENCE
Despite the persistent upheaval in Syria, where an insurgency is growing alongside civilian demonstrations, Assad's security forces seem to retain the upper hand for now.

"The Syrian regime is likely to retain power throughout most of 2012 ... Although military defections will increase, the army is likely to maintain its coherence," said Ayham Kamel, of the Eurasia Group political risk consultancy.

The Syrian opposition, driven by factional tensions, has yet to form a widely accepted representative council.

Despite the high casualty toll, Assad denied any policy to shoot demonstrators. "There is no cover for anyone. There are no orders for anyone to open fire on any citizen," he said.

Nevertheless, his priority was to restore order, which could only be achieved by "hitting terrorists with an iron fist."

Burhan Ghalioun, head of the opposition Syrian National Council (SNC), called Assad's speech dangerous because he had "insisted on using violence against our people, considered the revolution a terrorist conspiracy and thus undercut any Arab or non-Arab initiative to find a political solution to the crisis."

The struggle in Syria, Iran's only Arab ally, has alarmed its neighbors. Turkish Prime Minister Tayyip Erdogan, a former friend-turned-critic of Assad, warned on Monday that Syria was "heading towards a religious, sectarian, racial war."

Israel said it was preparing to take in refugees from Assad's minority Alawite sect should his government fall.

Ghalioun, the SNC leader, urged the Arab League to refer Syria to the United Nations Security Council to halt Assad's efforts to stamp out protests and to protect civilians.

The League seems divided over such a step, which in the case of Libya led to a U.N. resolution that NATO used as the basis for an air campaign that helped rebels oust Muammar Gaddafi.

Russia and China have opposed any Security Council move on Syria, while Western powers have not advocated military action in a country located in the volatile heart of the Middle East.

The West is wary also because of Syrian opposition splits over the role of armed resistance, the weight Islamist groups should have in any joint opposition body, and the scope for Arab, U.N. or other external action to drive Assad from power.

Jeremy Binnie, a senior analyst at IHS Jane's, questioned whether the outcome in Libya could be replicated in Syria.

"The Syrian regime would be a significantly harder to topple and the fallout potentially far more serious, especially given the country's arsenal of chemical weapons. Libya's air defenses were a pushover by comparison. Syria would be a challenge of biblical proportions compared with Libya," he said.