Yuan Hits Record Vs Dollar, On Track For Over-4-Percent Gain 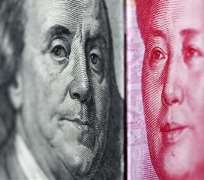 The yuan hit an all-time trading high against the dollar on Monday, guided by a stronger mid-point by the People's Bank of China, and looks set for an over-4-percent appreciation for 2011, traders said.

The yuan is expected to remain stable or rise slightly in the last week of the year to close 2011 near 6.30 versus the dollar, in line with market expectations.

The currency is likely to continue to appreciate next year as China continues to post big trade surpluses despite a slowdown in exports and amid pressure from the United States to let the yuan rise to balance bilateral trade, traders said.

But the yuan's appreciation is likely to slow to around 3 percent in 2012, with much of the rise seen in the second half of next year as China may keep the yuan relatively stable in the first half to assess the impact of the euro zone crisis, they said.

"The PBOC has recently set a slew of strong mid-points and pumped dollars into the market via state banks, giving the market a clear signal that the government won't let the yuan depreciate," said a trader at a major Chinese bank in Shanghai.

"But the central bank appears not in a hurry to let the yuan appreciate amid global economic uncertainties resulting from the euro zone debt crisis. So the yuan is likely to move largely sideways in coming months."

FIGHT SPECULATORS
The yuan has appreciated 4.1 percent so far this year, with most of the gain being recorded in the first 10 months of the year as China tries to rebalance trade and use the currency to help fight high inflation.

While the government has recently halted yuan appreciation amid slowing exports, it also seems to be wary of a weaker yuan that may lead to capital outflows.

Some overseas investors appear to have been shorting the yuan in recent months amid signs that China's growth is slowing under the double weight of a global slowdown and the country's monetary tightening policy in place since October last year.

The PBOC, in addition to using strong mid-points to signal government intentions to keep the yuan stable, has also acted to inject dollars into the market via state-owned banks whenever there are signs that the yuan is set to weaken sharply.

The yuan has thus been effectively kept in a range of 6.3 to 6.4 against the dollar since early November -- a trend traders say they believe to continue well into 2012.

In contrast, offshore benchmark one-year non-deliverable forwards (NDFs) have largely been forecasting yuan depreciation in a year's time since late September, reversing a general trend of forecasting appreciation since the yuan's revaluation in July 2005.

One-year NDFs fell slightly to 6.3740 on Monday against 6.3810 at the close on Friday, implying that the yuan will depreciate 0.9 percent in 12 months from Modnay's PBOC mid-point, compared with a 1.0 percent fall implied on Friday.