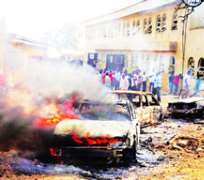 This was how Rev. Fr Isaac Achii, the Parish Priest of St Theresa's Catholic Church, Madalla, near Suleja, Niger State, captured the bomb explosions that rocked the church on Christmas Day. Not less than five explosions took place within the church's premises and along the road.

Eyewitnesses said that four policemen detailed to the church accosted three suicide bombers, asking them about their mission. The suspects claimed they were going to worship in the church. Suddenly, the bombs were detonated, consuming all of them.

At least 35 persons died, while over 100 others were injured. The death toll may rise as a result of the number of those injured in the attack. An official of the National Emergency Management Agency (NEMA) put the death toll at 40. The injured were taken to   Gwagwalada Specialist Hospital, Suleja General Hospital and other medical centres in Zuba and Madalla. The victims were deposited at the State House Mortuary and Suleja hospital. Ten buildings were destroyed, eight vehicles burnt completely and 10 others parked within the church premises and some private compounds, damaged.

Of the charred vehicles, some of them mangled, three had the entire families roasted beyond recognition. One was a family of five that were seated in a Toyota Sienna van, the other, a Mercedes Benz saloon car driven by one Mr Dike and his four children. One of his sons, who was greatly injured and his wife, who did not attend the church service, turned out to be the only survivors in the family. Another car was also said to have had a family of three, all died.

The Okechukwu family that dedicated a baby during the church service was lucky. The explosion flung open the car doors and the whole occupants of the vehicle were thrown to a safe ground. They were taken to hospital immediately.

Chairman of the Parish Council, Mr Joseph Nfiaji, told Daily Sun that members watched the families roast in the inferno, which followed the explosions. He said: 'We helplessly watched Mr Dike and others roasted like chickens by the fire. Nobody could go near the vehicles because the fire was better imagined. It was hell on earth.'

The bomb exploded at the centre of an asphalt road, just beside the entrance of the church. The explosion took place just minutes after the early morning Mass that ended at 8a.m, as worshippers were leaving the church.

Nfiaji said: 'The mass ended at about 7.50a.m, the priest announced that all worshippers should wait and take some powder since it is the birth of Christ. Some people could not wait and stepped out immediately, the next moment we heard a deafening sound, which was followed by flames. People were screaming and shouting. That was how these families were killed.'

He explained that there were two explosions -one, in the middle of the road, which created a crater and the other beside the church. 'It was like what we see in horror movies, one explosion in the middle of the road and another near the church. It was the bomb that exploded on the road that mangled the Toyota Sienna van and the fire from the Sienna spread to the other cars and killed these families I told you. This happened just within 10 to 20 minutes.'

When Daily Sun arrived at the scene at about 9a.m, the vehicles were still burning and billowing smoke. The rescue team which comprised of soldiers, staffers of the Federal Road Safety Commission (FRSC), National Emergency Management Agency (NEMA), Nigerian Security Civil Defence Corps and Mobile Police Force were carrying bodies wrapped in black body bags to ambulance buses stationed both in the church premises and on the road.

It was a frightening scene. The rescue team divided itself into three. Some were bringing out heaps of bodies from the drainages on both sides of the road while others were in charge of those roasted in their vehicles. A body was found on the roof of the church just as a woman clad in yellow ankara outfit was found in the rubbles of a collapsed fence. She was the last body to be found. Interestingly, a Bible, which obviously belonged to one of the occupants of the burnt cars, was found  untouched by the explosion. It was in the midst of the charred vehicles.

Security personnel at the scene had hectic time the crowd who were spoiling for war. The crowd reacted angrily each time wraps of bodies were brought to the ambulances. Addressing journalists in the church, Rev. Achii, who was close to tears, described the incident as unacceptable, calling on the Presidency to address the current insecurity in the country.

He said, 'these people came to worship their God, now they are gone; they have been killed; we will not accept this; the Federal Government must address this alarming insecurity in the country.'

During his speech to the Press, the priest, who was not at the church at the time of the incident, said his men informed him that as the explosions occurred, two strangers who were suspected to be among those that planted the bomb, acting like strangers, ran into the church backyard in an attempt to escape.  As they could not give any reasonable answer on how and why they were there, the worshippers apprehended and handed them to the police.

Also, the police reported that they caught two other men running away at a part of the town, called Monkey Village. The police also told the priest that they have got information from the men that made them believe they had a hand in the bombing.

Commissioner of Police in charge of Niger State command, Alhaji Ibrahim Maishanu, also told Daily Sun in Minna that the powerful bomb blast blown the roof of the church and some residential houses after it was detonated on a road close to the church by unknown persons.'I can confirm to you that a bomb blast took place in Madalla this morning and so far, 12 persons, including three policemen have so far died as a result of the blast and several persons injured.'All available policemen, including myself are now going to Madalla to assess the situation for ourselves and provide the needed assistance to the general public.

'I can assure that we will do everything possible to find those behind the blast and make them face the full wrath of the law,' he said. Chairman, Suleja Local Government Area, Alhaji Yunus Adamu, said the blast was the worst in the history of the area.'The bomb was dropped on the road and the blast dug a big crater on the road and affected the church and surrounding houses.'I cannot tell you the figure of fatality or those injured by the blast, as rescue operation is still ongoing, but it is a terrible situation,' Adamu said.

Soldiers have been sent to the town to calm nerves as tension mounts between Igbo traders and the Muslim community.

Meanwhile, Governor Mu'azu Babangida Aliyu has again condemned the spate of explosions rocking the nation; just as he urged President Jonathan to quickly convene a stakeholders' forum to proffer solutions to the incessant bombings.

Reacting to the Christmas Day blast, Gov. Aliyu said the spate of bombings in some parts of the country have become a national emergency and must be treated as such. Aliyu, in a statement signed by his media aide, Danladi Ndayabo, said he was deeply pained by the fact that the perpetrators chose a holy day to carry out such a dastardly act.

'The issue of security should not be left to government alone. My thinking is that government alone cannot stop the activities of terrorists which have left hundreds of innocent Nigerians either dead or wounded', the statement said.

Aliyu said it is important to sit with major stakeholders with a view to knowing what the grievances of the perpetrators are and to proffer lasting solutions to them. 'The current spate of terrorism if not checked, will among other things, affect Nigeria's quest for Direct Foreign Investment and ultimately thwart the attainment of Vision 20:2020,' Aliyu said.

He said government must bring the perpetrators to book.