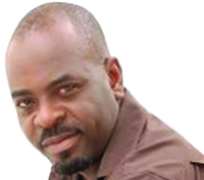 Funsho Adeolu is a household name in the Yoruba movie genre. He's been around for more than a decade doing what he knows how to do best. In this interview with Bolatito Adebayo, Funsho shares with us his experience , his origins and much more.

What are you up to lately?
I am an actor, director and into events too. So, if you are asking what I am up to lately, I will just say that I am waiting for a new job because right now I am not working on anything yet. I'm planning something for next year and because it is a big one I am looking for funding. By the time I'm ready I will let you guys know.

Do you intend going into the cinema too?
Sure. That is the only and the best way. We ran away from it, because some people came into the industry and they scattered it. Now , we have seen that it's possible for us to do cinema and showcase our movies properly and still make a lot of money.

You know for a very long time we were used to the 'idumota' thing. You do your movie, sell, get your money, no matter how small you make and you know those people at Idumota were supposed to be marketers but they were just selling and collecting the money and they were not marketing anything. The normal thing is for you to produce a movie and showcase it before selling it, but because there is no control in the market, there is no control in the industry. We have people who are directors, producers, actors without no proper training. It's not as if you didn't got to school to study theater arts you can't do well in the industry. Even if you didn't study it you could still do well.

Do you think Nigerians can afford the cinema now, because we are now limited to very few cinemas? You know during the Ogunde era it was the national theatre and it was cheap.

Of course, the average Nigerian can. In this setting, people that were enlightened thought that we ere losing the cinema culture so they decided to bring it up to their standard. By the time we get into the culture very well, some people will come together and say let's do something for the masses too. I am sure it won't only be limited to the cinemas we have now by the time we are ready for it. Something will happen. But we need to have to get our books right and get our production right.

Now with the standard at the galleria now, before you can take a movie there you have to think twice to meet certain standards. Before now may be just people from VI and the big guys go the galleria but right now everybody goes to the galleria. Even students pay just N500, so they will look for that money to go watch movies. So they are already catering for some people , because these people know that when they get there they will get to watch good movies. So if you are a producer and you want to show-case your movie, you have to achieve that standard. Invariably, very soon we will be able to separate the wheat from the chaff.

How long have you been in the industry?
Wow! Well I would say like twenty years now.
Can you compare when you started with what we have now?

But you know the answer already. There is a lot of improvement. It's like a child growing and everybody is moving up. What you saw then is not what we have now. We are using very good cameras now and we're trying to be up-to-date. Whether Yoruba or English, we are all improving. For instance, someone saw a new camera on the Internet and he said he wants to use that new camera for his next movie. The era of 7Ds and

D5 came and they were the biggest things , but right now, everyone can afford to use it , but before now it wasn't like so. It's like a competition now. Now, everybody wants to do the big things, although some people are still after the money but very many people now are after the name. They want something that would speak about them in five years to come. Everyone in the industry is now moving with time.

But what about the scripts, are they better now?
Yes, they're. You see I did a job recently and the script conferencing was like for six months. We invited writers and we put heads together. After a while we brought in people to analyze it and then we had to re-write and work again on the dialogue.

To an extent, I agree that in the Yoruba movie genre, the scripts have improved but why is it that when there is a problem, you need the herbalist, pastor or Imam to resolve the issue?

The ones you watch on African magic?
Of course, I watch African Magic but even a recent Yoruba movie I saw at the cinema by a veteran in the industry really surprised me , because of the resolution too.

You know why? We always say that but we cannot run away from our culture. Yoruba moviemakers are the custodians of culture. So you don't have a choice because we have to display our culture to the world. If you have a problem right now, the only remedy for you is God. If you have a psychological problem or emotional problem it's easy for you to speak to somebody and get back to life. You can confide in a friend but when you have a real problem there is no other remedy except God. I don't really support the herbalist solution, but I would prefer church because I am a Christian and if you are a Muslim then maybe a mosque or so. Movies are about resolving conflicts. If a conflict is well resolved then you won't even mind how it was resolved. You will just enjoy the movie.

A lot of people say that when you watch a Yoruba movie, you will always remember you are an African or Nigerian. It's because of this show of culture. So we cannot avoid it, it's not possible. Even during the Ogunde era, he was always into it and people enjoyed it. People came from outside Nigeria to watch it. The last one Ogunde did and was even wheeled to the setting, the lead actor was Sean Connery. So we cannot avoid it. One thing is that if you must do it, you must do it well. I remember when we had to shoot a movie on the Osun River we had to get a professor to be the herbalist. He wasn't into the arts at all but he understands ifa very well. The way he played his role, even I was interested in ifa that day. Some viewers worship Ifa and they don't go to church or mosque and they understand such parts better because that is the only remedy for them.

It is also rampant in Yoruba movies. You know sometimes you want to blend and we have many young people that watch Yoruba movies. Unlike before when only the elderly watch Yoruba movies. When people overdo these things, it still boils down to the fact that many of them are not professionals. When you watch movies featuring Tade Ogidan, Jimi Odumosu, Amak Igwe and the likes, you will not see stuffs like that. If any actor has to wear anything skimpy it means that the characterization befits that dressing. It's not about showing every part of your body because the culture in Nigerian does not allow that. So we have to respect that. For instance, somebody said that people watch Ghanaian movies more because of that but we cannot be like them. That is Ghana and this is Nigeria. If you have to, then the character must look like that.

What was your childhood like?
It was okay, but I lived at different times with my dad and mum separately and I didn't really feel it. I thank God I turned out well. But my dad and mum are still very good friends. They were never married and it just happened.

How long have you been married?
I've been married for six years.
How did you meet your wife?
I met her on set. She was behind the camera. I was with Kunle Coker and we were trying to go out clubbing and I just saw this modestly dressed lady.

What was the attraction then?
She was modestly dressed. She wore no gold and she wasn't flashy. She had no make-up on and it was just natural beauty. She also had good character. When she heard it was me she said no and she ran away from me. But at the end of the day we worked things out.

How does she cope with being married to a celebrity?

She was into showbiz, so she was used to it. Although it's not that easy though but she is used to all the rumor, not coming home and stuffs like that.

How do you cope with being a father, husband and your career?

When I am not working and I am at home I don't go out and if I have to go out it has to be with my family.

Where do you want to be in the next five years?
I will still be acting but by the grace of God I will be richer than this. (Laughs)

Aside acting what else do you do?
Everything showbiz, I am into music too, I have a band. I anchor and plan events as well.

Was there a time you wanted to pull out of acting?
God forbid! Never .
Your parents never discouraged you?
My parents tried to discourage me, because they believed there was no money in it, but I told them not to worry about that.

What advice do you have for people looking up to you?

You have to get an education first, it's very important. You must be different if you want to make a name in this industry, because we have a lot of very good actors. So if you are well educated it gives you an edge. You shouldn't just jump at any script; you need to ask questions before anything. For instance I can't be a doctor because I don't like to see blood. So if you want to be an actor you must know what it takes to be an actor.

Who are the people you look up to in the industry?
I don't really look up to people but I respect some people because of the standard they have attained. If you're asking for my role models then I would say Antar Laniyan, Tunji Bamishingbin, Olu Jacobs, and Tade Ogidan, because of his directing skills.