’I want people to see me and get turned on.’----Adaora Ukoh 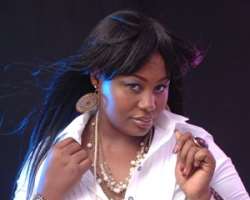 Adaora hit the big screen with a movie titled Black Bra some years ago. She was making a comeback to the industry she had left behind to pursue a degree in Law. The movie enjoyed rave reviews and the actress was happy to be back on the scene.

Then came grave silence; Adaora was certain it had to do with her size. 'Not too many producers are keen on working with plus-size actresses,' she complains. 'We are generally neglected because they aren't creative enough to find suitable roles for people like me.'

There's still the worry of being stereotyped, as a plus-size, in the industry. 'I get only certain kinds of roles that are hardly challenging; but you play along because of the love you have for the job.'

But Adaora comes with impressive talent; her roles as an angry sister, a crazy girlfriend, a mother or an aunt, truly limit her flair and versatility.

'I'm looking for something new, something fresh off the baker's oven!'

She's looking no further than being a part of 'Nollywood Next', which is a tag for more intense movies produced by people who can be regarded as professionals. 'I watch movies like 30 Days, Figurine, and there's a need to want to join the train.'

Her trite years in the industry might be coming to an end soon as she is keen on re-branding her worth.

'It's not just about being a good actress; it's taking it a step higher and building on the brand that you have become. I am interested in that.'

We remember Adaora, in her first-ever Nollywood appearance many years ago. She was only a teenager but she managed to carry a wifely role in the movie Karashika well enough.

At just 17 she was a remarkable talent, and a plus size beauty.

Another prominent character followed afterwards in Cursed from Beyond where she starred alongside Regina Askia.

An embodiment of African beauty

Interestingly, Adaora represents a large number of Nigerian women. 'Everywhere you look we have confident plus-size women excelling in different industries.' And the question remains; why should Nollywood be any different?

As she sips a glass of mango juice at Swe bar, she meditates on the success of Hollywood stars like Queen Latifah who has gone ahead to conquer her industry regardless of her size. 'She probably would have been looked-over if she were here in Nollywood,' Adaora states.

Adaora is hopeful as she looks forward to playing versatile roles, 'just so it can be known that a big girl can interpret whatever role she's given.'

'It's been a slow year for me; maybe it has to do with recession, but it's a good thing because I've been involved in some really cool projects' she adds, shrugs and sips from her glass.

As she looks forward to a new year, Ms. Ukoh has her fingers dipped into many pies. 'As we speak, I've recorded over 12 episodes of my talk show – Diva Dynasty.'

Diva Dynasty is a TV concept focusing on women. Ms. Ukoh is going all the way to empower women and youths; and giving them a platform to share, inspire and grow.

If it sounds cliché, it probably is, but Adaora quickly defends her concept; 'It's different because we make it a show that gives all access to the icon under study. It's not shot in a studio; what we do is pay a visit, lean on the couch, look through family pictures, and get the guest talking.'

The show takes one busy day out of an iconic woman's schedule and asks all there is to know. She is looking at February for kick-off of the first season on DSTV and terrestrial TV. 'I've interviewed inspiring women like Joke Silva and Tara Fela-Durotoye…'

You might wonder why she is dabbling into TV as a Talk-show host; 'someone believed in me,' she says. 'They had a concept, had the funds and sponsors; they wanted a host, so they approached me. I thought it would be a good way to leverage on my brand.'

She is keeping her fingers crossed on the acceptability of the show and praying she becomes just as good as Oprah.

There's just another part of Adaora that might put a smile on the faces of her fans; most of whom are just as big as her, or are inspired by her size. 'I'm floating a fashion label soon,' she enthuses. Her cheeks blossom in delight as she shares her thoughts on what she plans to call – Adaora Couture.

'The plus size women are holding the short end of a stick in a society fraught with slim models on the runway and in boardrooms. With my fashion line I just want to make one thing clear – big can be sexy, cool, and hot!'

We have no doubt she'd pull that one remarkably well.

'Adaora Couture deals with fabrics that are flattering on plus-size women. We lean towards comfort with a touch of class.'

She vows with a smile that the clothes from her line will be reasonably priced without compromising on quality.

'We'll have a one-on-one relationship with clients,' she says as she chips in the bit of the couture line being in collaboration with a friend.

She seems quite ready for the challenges ahead. 'I love to multi task,' she beams proudly.

Journalists on the prowl

So next year is definitely an Adaora year! She's determined to make it so as she battles to fight back a bit of her reputation from the hands of inept journalists.

'I haven't had a good year with the press,' she confesses. From blatant lies to calculated propaganda, Adaora has been accused many times of being a sex-craved actress, something she has had to defend over and again.

'I get interviewed only for me to pick the paper up the following week and realise my utterances have been twisted to suit the mind of a disturbed writer. It's sickening!'

One that urgently comes to mind is a headline screaming at the top of its lungs:

'I want people to see me and get turned on.'

'I never said that,' Adaora states, They just want to sell by all cost, so we are only preys in the hands of some of these journalists.'

This, however, is sadly true.

The interview gradually winds to an end as she is ready to hit the gym; her black-striped sneakers bounce stylishly on her feet and her black combo looks just as sporty as her craving.

I quickly ask the familiar question: 'any man in the picture?'

She laughs shyly and shakes her head. 'No man. It's by choice really. I'm trying to focus on my career…'

We've heard that too many times, haven't we?

But she adds, as if reading my thoughts; 'I have no problem with falling in love; but you have to wait for the right one. He doesn't have to be perfect; just right for me.