Nigerian footballer gets 40 lashes for drinking in Sudan 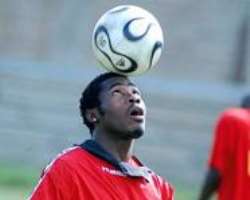 Stephen Worgu, 20, (pitured above) who plays for first division outfit al-Merreikh of Omdurman, Khartoum's twin city, was found guilty on Tuesday of drinking alcohol and driving under the influence.

"I am finding it hard to adapt (in Sudan). It's a different culture, different religion, different language, everything," Worgu told the BBC in April.

"They have this Sharia law, and it's really affecting me, also because you don't feel free to do the things you need to do."**

Eh Stephen, you are actually very free to come back home and play for Enyimba of Aba...or any of the other local clubs. They don't flog in Nigeria for drinking :-)

Is Sudan not a war-torn country?