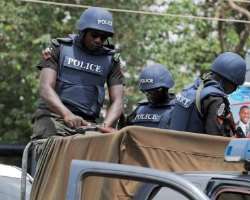 SAN FRANCISCO, December 8, (THEWILL) – Armed men Thursday night stormed the Kano residence of one of the daughters of Nigeria’s former military dictator, General Sani Abacha, shooting randomly into space before disposing her of her personal effects and unspecified amount of cash.


THEWILL gathered that Ms. Zainab Abacha was unhurt during the raid.


The gang of four thieves who arrived her Hospital Road home of at about 7.45pm had successfully completed their operation when a team of policemen stormed the scene to confront them. The subsequent exchange of gunfire led to the arrest of one of the fleeing thieves who was serious wounded in the gun fight. The others successfully got away.


Kano Police Command Spokesman, Mr. Auwal Umar, told journalists that the police responded after it received a distress call from a neighbour. The Police, he said would apprehend those that got away.


The identity of the detained robber was not made public.