My Experience In Kidnappers’ Den--MR IBU 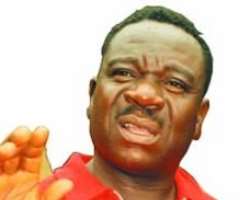 Popular Nollywood actor, John Ikechukwu Okafor a.k.a. Mr. Ibu, is angry with the politics of the Actors Guild of Nigeria (AGN). In this interview, he spoke about his experience with kidnappers and other issues

Q: Sorry about the recent abduction of your friend and colleague, Nkem Owoh (Osuofia). How did you receive the news?
A: It's sad. This is a bad development that has to be nipped in the bud. I am not happy that those smart guys have now decided to do brisk business with the kidnapping of actors. I was the first victim of kidnap last year. It's just that my own experience was different because my abductors freed me in less than 24 hours. Just a few months ago, they also abducted Pete Edochie and now, it is Osuofia. We need to be very careful. It was one of his boys that called me that he (Osuofia) was kidnapped on Sunday night, while he was returning from Port Harcourt after a function. The kidnap, according to the boy, took place along the Aba/Port Harcourt link road and that's all we were able to gather. Nobody can tell where he was taken to.

Q: How were you kidnapped last year and what really happened?
A: Mine was another interesting story you'd like to hear. I was at a joint somewhere around the Eastern part of the country and as we were dancing to some music, some guys drove down and parked at a distance. Immediately, I noticed that one of them danced towards my direction and pretended as if he was set to dance with me. Few minutes later, he joined me very closely and I was dancing and said “Bros, you see that car wey dey for there?” (pointing at a parked vehicle), I said yes and he said, “go enter am.” Then, I asked him why, we dey travel? He said, 'yes' and that I should cooperate with him, otherwise I would have myself to blame.
Somehow, I obeyed, having noticed that there was fire on the mountain. That was how I danced towards the car and the guy was dancing after me as if nothing was wrong. As I got to their car, I asked where we dey go? But the guys insisted I must not ask further questions. Then, they started playing with me as if we had known each other. After driving for a few kilometres, they took me to a boat already waiting to take off. That was how we got to their den, after travelling on water for about two hours. Although they did not harm me, they expressed their grouse with the government and requested that I must address the issue with a camera placed in front of me. I was asked to lambast the government including former President Olusegun Obasanjo. I did exactly as they commanded under duress. It was a terrible experience but I left the place smiling because at the end, they gave me a gift of N100,000 for lambasting the government.

Q: So, how come the incident was not reported in the media?
A: That's because they freed me in less than 24 hours. It was not necessary.

Q: What do you think the kidnappers want to achieve with the current abduction of actors?
A: Nobody can guess, but with my abduction and that of Pete Edochie, I think it looked similar. All they required from me was that I must talk to the people at the helm of affairs, which I did. During the abduction of Pete Edochie, I also gathered that they told him to speak with the people in government. I am sure they will do the same with Osuofia before freeing him. However, their belief that we are close to the government is nothing to write home about. I think they believe we have a link with the government and that's why they are beginning to kidnap actors. Please, help us appeal to them to spare us in this kidnapping saga.

Q: Why is it that only AGN actors are being kidnapped?
A: That's a question I cannot answer. They may have their reasons, but I can't tell.

Q: When they kidnapped you, did they make any attempt to collect a ransom before they let you off?
A: No, I did not even ask for money. How could I? To my surprise, they did not ask for money either, but they gave me the money as mobilisation fee, having lambasted the government on their behalf.

Q: Did you also make them laugh during the period?
A: I can't even remember. Maybe I did, but I wouldn't know. I am sure Osuofia is capable of making them laugh. Let us just pray that they don't harm my friend because I am sure he has been reeling out jokes to his captors.

Q: Let us talk about your career. Is it true that you recently did a film with Jackie Chan?
A: Oh, yes, it's true. It is a world class project. I learnt the producers actually conducted a poll on the most loved actor among Nkem Owoh, Charles Awurum and I. But to God be the glory, they eventually contacted me and said I was tipped for the job. It was an opportunity for me to work with the best actors in Europe, America, Australia, Asia and other continents of the world. I was the only person from Africa. It was like a reality show and I really enjoyed myself.

Q: How challenging was it?
A: It was very challenging indeed. As a matter of fact, I played Okoro, the man from Africa. We combined experience and skill to achieve the project. During the shooting, I noticed that at a point, I had to be evicted because it was more of a reality show. The amazing thing was that I never knew how popular I am until over 25,000 people trooped out to protest my eviction by carrying placards and my photographs. They all insisted that they wanted Okoro in the house and so, I was not evicted. It was a big project I would forever adore.

Q: So, you did not experience any form of discrimination during the project?
A: Why would there be? They called me for a job, it's not as if I lobbied for it.

Q: And did you learn any lessons from there?
A: With the things I learnt on that set, I can now admit that Nollywood is still far behind. We have not really gone far in this business technically, I must confess.

Q: Why were you evicted?
A: It was because I told them initially that I could excel in sports and they believed. But after they tried me in all the sports including high jump, they noticed I was just boasting. In the first place, how could they have believed that a robust man like me could jump? I even had a fracture on my leg during the jump.

Q: So, what did you learn from Jackie Chan and others?
A: The guy came with a team of macho men from Japan and he really encouraged me to do a lot of things. He even taught me karate. Right now, we are very good friends.

Q: How much did you receive for the project?
A: That is not for public consumption.

Q: Is it right to say your level has changed?
A: Well, to God be the glory.

Q: And back home in Nollywood, how do you feel?
A: Although home is home, things are not right in Nollywood. Right now, I am not happy with the rancour in AGN.

Q: But we learnt some top actors including you have adopted Segun Arinze as the president even though others believe he came in through the back door?
A: I can never support Segun Arinze's presidency. Where is he coming from and what has he done for AGN? The record is there. He has not even updated his membership for ten years now, not to talk of paying his dues. Who elected him? To worsen the matter, he is not even a member of the Lagos chapter of AGN, so how can he claim to be president?

Q: Do you then suspect any foul play?
A: I don't even suspect, I know there is a foul play. I learnt that there is a peace meeting in the offing between the Board of Trustees (BOT), Caretaker Committee and Segun Arinze, but if at the end of the meeting, they decide to adopt him as president, then there will be problem in AGN. With Segun as president, AGN is on the brink of collapse. The guild will divide and there will be factions.

Q: Do you have grudges with him?
A: He is my colleague and friend. Before now, AGN had been united. I have no grudges against him, but I will say the truth, no matter what it will cost me. I can keep my mouth shut if he settles for the post of vice-president, but he cannot be president, at least for now. The other time, he came to a meeting held to battle Ejike Asiegbu, who turned everything upside down. At that meeting, I can remember how Arinze castigated Asiegbu. He even donated N50,000 to remove him from office. Now, it is the same Asiegbu that installed Segun Arinze, that's foul play. Politics is a dirty game anywhere in the world and now, it is rocking our own association.

Q: But I was thinking you are too busy to be involved in AGN politics. Why are you now showing interest in it?
A: I am not interested in the politics but as a bona fide AGN member, I have to speak the truth. The record is there. I have paid my dues as a member of the guild, I have spent my personal money for the guild and single-handedly established AGN in Italy, South Africa and other parts of the world with my money although with the approval of the leadership of the guild. So, the issue is something that has to be treated carefully. As far as I am concerned, they are all joking.

Q: What would you suggest as possible solution to the problem?
A: We need an election that will make us have new leaders. I am not in support of the plot by Segun Arinze that in the spirit of peace and unity, the BOT can now dissolve other executive members and probably constitute a new the cabinet.