Latest news from the ACTORS GUILD OF NIGERIA(AGN) 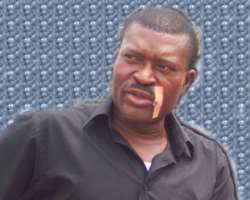 This is Agn news and i present to you what is happening behind the scene.

The politics of AGN is getting hotter and hotter and nobody can ignore it.i would say its a purging phase that will pass with time.

-The latest on AGN is that Mr. Segun Arinze who was elected in an election conducted by Ejike Asiegbu has been making underground moves and reaching out to stakeholders and members of the board of trustees.Last week, his efforts yeided fruits when the Board summoned KOK and told him that for peace to reign, Segun should be allowed to remain the AGN president.

This did not go down well with KOK and he immediately summoned a meeting in his office. Among those who attended where Emeka Ike [who is the financier of the group and who wants to be Agn president by all means], Andy Chukwu, Chike Bryan,Ifeanyi Ikpoenyi and Ernest Obi, the chairman AGN lagos state chapter.during this emergency meeting,Ernest Obi who has been reaping the fruits of his new association with Emeka vowed to fight the BOT but complained that his jeep was faulty and parked in a mechanic garage.Emeka Ike wrote him a cheque of N50,000 asking him to mobilize his men immediately.An undisclosed sum of money was also given to KOK who complained he was borrowing money to fund AGN matters.at the meeting,the pharmacy shop owner near Koks office complained bitterly that they should stop spoiling that air with the 'thing' being smoked.

-Ejike Asiegbu is in far away Zimbabwe directing a movie and at the same time monitoring what is going on in AGN.His stooge,Chuma Onwudiwe gives him a daily report of everything that happens.the only worry is that chuma is a rumoured propangandist and an alarmist.

Two weeks ago,there was trouble among the group when they went to Niger state to visit the governor on account of FACE OF NOLLYWOOD project,a project which caused a major fight between the former President Ejike Asiegbu and Chike Bryan,Andy Chukwu and Ifeanyi Ikpoenyi.KOK who was promised a certain percentage in the project went to see the Niger state governor with the group.Trouble started when on a second visit he wanted to see the governor alone and this caused a lot of problem among the team with KOK insisting that it was his presence that made the governor support the project in the first place.

-Supporters marvel at the silence of the new agn president despite all the darts being thrown at him but are afraid that they have lost his presence because of this silence.

-More news as it unfolds.