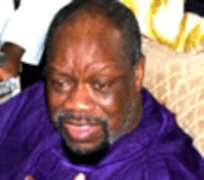 •Ojukwu
Chukwuemeka Odumegwu-Ojukwu was a Nigerian military officer and politician. He served as the military governor of the Eastern Region of Nigeria in 1966, the leader of the breakaway Republic of Biafra from 1967 to 1970 and a leading Nigerian politician from 1983 to 2011, when he died, aged 78.

Ojukwu came into national prominence upon his appointment as military governor in 1966 and his actions thereafter. A military coup against the civilian Nigerian Federal Government in January 1966 and a counter coup in July 1966 by different military factions, perceived to be ethnic coups, resulted in pogroms in Northern Nigeria in which Igbo were predominantly killed.

Ojukwu, who was not an active participant in either coup, was appointed the military governor of Nigeria's Eastern Region in January 1966 by General Thomas Aguiyi Ironsi. He led talks to seek an end to the hostilities by seeking peace with the then Nigerian military leadership, headed by General Yakubu Gowon (Nigeria's head of state following the July 1966 counter coup). The military leadership met in Aburi Ghana (the Aburi Accord), but the agreement reached there was not implemented to all parties' satisfaction upon their return to Nigeria.

The failure to reach a suitable agreement, the decision of the Nigerian military leadership to establish new states in the Eastern Region and the continued pogrom in Northern Nigeria led Ojukwu to announce a breakaway of the Eastern Region under the new name Biafra Republic in 1967. These events sparked the Nigerian Civil War. Ojukwu led the Biafran forces and on the defeat of Biafra in January 1970, and after he had delegated instructions to Philip Effiong, he went into exile for 13 years, returning to Nigeria following a pardon.

Early life and education
Ojukwu was born on November 4, 1933 at Zungeru in northern Nigeria to Sir Louis Odumegwu-Ojukwu, a businessman from Nnewi in south-eastern Nigeria. Sir Louis was in the transport business; he took advantage of the business boom during the Second World War to become one of the richest men in Nigeria. He began his educational career in Lagos, southwestern Nigeria.

In 1944, he was briefly imprisoned for assaulting a white British colonial teacher who was humiliating a black woman at King's College in Lagos, an event, which generated widespread coverage in local newspapers. At 13, his father sent him overseas to study in the UK, first at Epsom College and later at Lincoln College, Oxford University, where he earned a master's degree in history. He returned to colonial Nigeria in 1956.

Early career
He joined the civil service in Eastern Nigeria as an Administrative Officer at Udi, in present-day Enugu State. In 1957, within months of working with the colonial civil service, he left and joined the military as one of the first and few university graduates to join the army: O. Olutoye (1956); C. Odumegwu-Ojukwu (1957), E. A. Ifeajuna and C. O. Rotimi (1960), and A. Ademoyega (1962).

Ojukwu's background and education guaranteed his promotion to higher ranks. At that time, the Nigerian Military Forces had 250 officers and only 15 were Nigerians. There were 6,400 other ranks, of which 336 were British. After serving in the United Nations' peacekeeping force in the Congo, under Major General Johnson Thomas Aguiyi-Ironsi, Ojukwu was promoted to Lieutenant-Colonel in 1964 and posted to Kano, where he was in charge of the 5th Battalion of the Nigerian Army.

1966 coups and events leading to
Nigeria-Biafra civil war
Lieutenant-Colonel Ojukwu was in Kano, northern Nigeria, when Major Patrick Chukwuma Kaduna Nzeogwu on January 15, 1966 executed and announced the bloody military coup in Kaduna, also in northern Nigeria. It is to Ojukwu's credit that the coup lost much steam in the North, where it had succeeded. Lt. Col. Odumegwu-Ojukwu supported the forces loyal to the Supreme Commander of the Nigerian Armed Forces, Major-General Aguiyi-Ironsi. Major Nzeogwu was in control of Kaduna, but the coup had failed in other parts of the country.

By May 29, 1966, there was a pogrom in northern Nigeria during which Nigerians of South eastern Nigeria origin were targeted and killed. This presented problems for Odumegwu Ojukwu. He did everything in his power to prevent reprisals and even encouraged people to return, as assurances for their safety had been given by his supposed colleagues up North and out West. On July 29,1966, a group of officers, including Majors Murtala Ramat Rufai Muhammed, Theophilus Yakubu Danjuma, and Martin Adamu, led the majority Northern soldiers in a mutiny that was later tagged 'counter-coup.' The Supreme Commander General Aguiyi-Ironsi and his host Colonel Fajuyi were abducted and killed in Ibadan. Ojukwu insisted that the military hierarchy must be preserved; in which case, Brigadier Ogundipe should take over leadership, not Colonel Gowon. However, the leaders of the counter-coup insisted that Colonel Gowon be made head of state.

Leader of Biafra
In January 1967, the Nigerian military leadership went to Aburi, Ghana for a peace conference hosted by General Joseph Ankrah. The implementation of the agreements reached at Aburi fell apart upon the leadership's return to Nigeria and on May 30, 1967, as a result of this, Colonel Odumegwu-Ojukwu declared Eastern Nigeria a sovereign state to be known as BIAFRA: 'Having mandated me to proclaim on your behalf, and in your name, that Eastern Nigeria be a sovereign independent Republic, now, therefore I, Lieutenant Colonel Chukwuemeka Odumegwu-Ojukwu, Military Governor of Eastern Nigeria, by virtue of the authority, and pursuant to the principles recited above, do hereby solemnly proclaim that the territory and region known as and called Eastern Nigeria together with her continental shelf and territorial waters, shall, henceforth, be an independent sovereign state of the name and title of The Republic of Biafra.' (No Place To Hide Crises And Conflicts Inside Biafra, Benard Odogwu, 1985).

On July 6 1967, Gowon declared war and attacked Biafra. For 30 months, the war raged on. Now General Odumegwu-Ojukwu knew that the odds against the new republic were overwhelming. Most European states recognised the illegitimacy of the Nigerian military rule and banned all future supplies of arms, but the UK government substantially increased its supplies, even sending British Army and Royal Air Force advisors.

After three years of non-stop fighting and starvation, a hole did appear in the Biafran front lines and this was exploited by the Nigerian military. As it became obvious that all was lost, Ojukwu was convinced to leave the country to avoid his certain assassination. On January 9, 1970, General Odumegwu-Ojukwu handed over power to his second in command, Chief of General Staff, Major-General Philip Effiong, and left for Cote d'Ivoire, where President Felix HouphÃ¶et-Biogny - who had recognised Biafra on May 14, 1968 - granted him political asylum.

After Biafra
After 13 years in exile, the Federal Government of Nigeria under President Shehu Aliyu Usman Shagari granted an official pardon to Odumegwu-Ojukwu and opened the road for a triumphant return in 1982. The people of Nnewi gave him the now very famous chieftaincy title of Ikemba (Strength of the people), while the entire Igbo nation took to calling him Dikedioramma ('beloved hero of the masses'). His foray into politics was disappointing to many, who wanted him to stay above the fray.

The ruling party, NPN, rigged him out of the Senate seat, which was purportedly lost to a relatively little known state commissioner in then Governor Jim Nwobodo's cabinet called, Dr. Edwin Onwudiwe. The Second Republic was truncated on December 31, 1983 by Major-General Muhammadu Buhari, supported by General Ibrahim Badamosi Babangida and Brigadier Sani Abacha. The junta proceeded to arrest and to keep Ojukwu in Kirikiri Maximum Security Prison, Lagos, alongside most prominent politicians of that era. Without ever charged with any crimes, he was unconditionally released from detention on October 1, 1984, alongside 249 other politicians of that era.

After the ordeal in Buhari's prisons, Dim Odumegwu-Ojukwu continued to play major roles in the advancement of the Igbo nation in a democracy because, according to him: 'As a committed democrat, every single day under an un-elected government hurts me. The citizens of this country are mature enough to make their own choices, just as they have the right to make their own mistakes.'