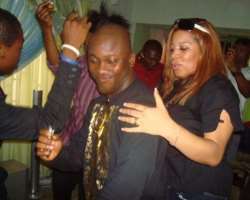 The word about town is that the love turned sour story of entertainment couple – Dejo Richards and Monalisa Chinda, might not have ended after all. Aside the obvious fact that Monalisa, who is one of the leading Glo ambassadors, is being guided and guarded by her uncle, Mr. Kool, since the messy break up, she is also said to have been getting several emissaries and pleas from her estranged hubby.

Unconfirmed reports has it that Dejo Richards, who used to manage Kevin Luciano's Questionmark entertainment before quitting amid controversy has embarked on a 'come back home' mission and this Klieglights gathered is to ensure that his wife and daughter return home.

Though it is unsure if Monalisa is ready to take him back as she is said to be living happily as a single mother, those in the know hinted that friends and family of Monalisa have shown their displeasure at Dejo Richards' pleas.