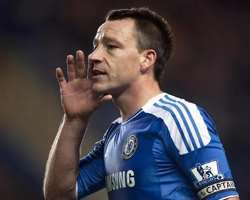 The Chelsea defender, 30, has strongly denied allegations he had aimed abuse at Ferdinand, the younger brother of his long-time international team mate Rio, during a ill-tempered west London derby.

"A 30-year-old man was interviewed under caution on Friday, November 25, he was not arrested," said a spokesman for London's Metropolitan Police.

"It relates to an inquiry (into an incident) that allegedly took place on Sunday, Oct 23. involving alleged racial abuse."

An incident involving the two players was widely publicised after footage was shown on the Internet and an anonymous complaint was made to the police. The Football Association (FA) is also looking into the claims.

Terry has said the incident, which came during QPR's 1-0 win, was a misunderstanding.