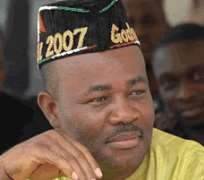 • Akpabio
The hitherto rosy relationship between Akwa Ibom State Governor, Chief Godswill Akpabio, and the Ibibio, majority ethnic group in the state, may soon hit the rocks as the group has accused the governor of interfering in their traditional and cultural affairs.

The bone of contention is the protracted issue of who becomes the next Oku Ibom Ibibio, the highest traditional position of the Ibibio, a position the current paramount ruler of Onna, Edidem Akpabio Udo Ukpa, has been eyeing but resisted by other paramount rulers of Ibibio extraction.

Some traditional rulers, including some paramount rulers of Ibibio extraction, surprisingly stormed Akwa Ibom State Government House within the week to inform the governor that they had fixed January 13, 2012, for the official coronation of Edidem Ukpa as new Oku Ibom III.

The governor was said to have congratulated the group led by the paramount ruler of Ikot Abasi, Edidem Udo Ntuk Obom, who is supposed to be chairman of Ukpa's coronation planning committee..

But in a swift reaction to the announcement, paramount rulers of nine local government areas led by chairman of the state's council of traditional rulers, HRM, Okuku Ime Udousoro Inyang, addressed the press at Asan Ibibio (Ibibio Parlor) on Friday to strongly warn Akpabio against interfering in Ibibio traditional matters, especially as it concerns Ifim Ibom Ibibio and Oku Ibom Ibibio stool, as there are other important state matters demanding his urgent attention.

The group, which operates on the platform of Supreme Council of Ibibio Traditional Rulers, accused Akpabio of trying to impose Ukpa, being his adopted monarch, as the Okuibom Ibibio III, with a plan to use the state's apparatus, instrument and resources to impose him on the people of Ibibio.

To set the record straight, the royal fathers said Okuibom stool was a revered position in Ibibio land, and is normally occupied by president of Ifim Ibom Ibibio, which is the Supreme Council of Ibibio Traditional Rulers.

The traditional rulers said Edidem Ukpa cannot ascend the stool, having been expelled from the traditional institution for gross misconduct and insubordination to the leadership of Ifim Ibom Ibibio.

'The reason for his expulsion was that three days after the burial of the slain Okuibom Ibibio III, His Eminence, Edidem Robert James Obot, Edidem Ukpa went on air to declare himself as Okuibom Ibibio III, without recourse to Ibibio traditions and customs and the constitution of Ifim Ibom.

'For avoidance of doubt, in the history of Ibibio people and in the records of Ifim Ibom Ibibio, the Okuibom I was Edidem Udo Uyota Akpabio, who hails from ONNA (same as Ukpa), Okuibom II was Usonyin Okon Ekpo Ekpo from Ibesikpo Asutan LGA, while Okuibom III was His Eminence, Edidem Robert James Obot, from Nsit Ubuim LGA. History cannot repeat itself and so Ibibio people cannot have another Okuibom III,' they said.

Speaking on behalf of the Supreme Council, the paramount ruler of Etinan LGA, Edidem Ime Dickson Umoette, said the traditional leaders of different ethnic groups in the state have their ways of selecting leaders, which does not include politicking, campaigns, electioneering and the involvement of state government apparatus.

'We must observe here that when our Annang brothers (paramount rulers) selected/ elected Itai Afe Annang, there was no intrusion from government or government agents, the governor did not super-impose his preferred candidate on his kinsmen - the paramount rulers of Annang extraction,' they recalled.

The Supreme Council advised Akpabio to channel the state's funds to other useful ventures that would yield immediate and direct benefit to the government and people of Akwa Ibom, instead of wasting it on matters that government do not have authority over.

The royal fathers used the occasion to restate the expulsion of the paramount ruler of Onna, Edidem Akpabio Udo Ukpa, from Ifim Ibom Ibibio and further reistated that matters relating to Ibibio traditional institutions, customs and traditions usually must take place at ASAN Ibibio, the ancestral shrine of the Ibibios, hence declaring null and void the purported installation of Ukpa at Ibom Hall.

It would be recalled that the stool of Oku Ibom Ibibio had been under tensed controversy until the recent brutal murder of the Oku Ibom Ibibio III, Edidem Robert James Obot, which left behind one of the contenders, Edidem Akpabio Ukpa, who had just been adopted by Governor Godswill Akpabio for installation.