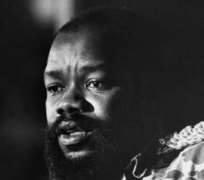 According to sources, he died late last night.

He had been sick for a while and was receiving treatment at a united Kingdom (UK) hospital.

May his soul rest in peace..amen.