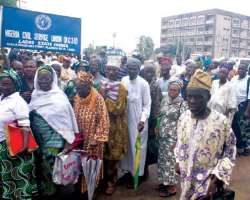 The blind person who shuts his eyes and says he is asleep; when he was not asleep whom did he see?


My name is Abdul-Chukwudi Balogun, I work with the Federal Civil Service, I am on level 8, and I have put in approximately 10 years into the service.


This is my story, by my standard I work hard; I do not know what the general standards are because they vary depending on situations, persons, time and other factors.


I have colleagues whose name exists only on the payroll, I have never seen them, but they are paid--You call them ghost workers. There are others, no longer colleagues, having put over 30 years, they die in queues as they wait for peanuts called gratuity.


You call them pensioners, I see them as the reason I might need to steal sooner than later.


But this story is not about them, it’s about me. I have a wife, three children, aged between 5-15 years; my wife does petty business to augment our income.


I am sure you are wondering how this concerns you or the essence of my story. Just bare with me...You will find out soon.


I live in the outskirts of Abuja, precisely Mararaba, depending on the type of vehicle, I pay between N70-120 everyday to get to the office, navigate an average of three hours on the traffic, get to the office as early as 10.00am. There are days, I get to the office by 1.00 or 2.00pm, on days like that I just peep in and out. And on rare occasions I make it very early, that's by 9.00am.


My three kids attend private schools, the 'I pass my neighbour' type. I am sure you are wondering which type that is. We have different types of private schools these days.


For three terms I pay between N16, 21 and 32, 000 for the three kids respectively. This excludes books, transport, many plus, multiplications, no minus.


Did I tell you I am the first child, several responsibilities, brothers, sisters, aged-parents and the usual faulty family support system?


I have regularly told my family of four the implication of staying healthy not because of any special reasons but because hospitals are one luxuries and secondly, the affordable ones are morgues, so we manage Emeka's local chemist shop to help when the need arises.


I have spared you the details, PHCN bills, water rates, other utilities, off course some I pay for, others I do not, some that I pay for; I get services, others I never get any form of service. In addition to the fact that my salary never come as at when due, because either we are on strike, or there is electronic payment wahala.


I have left out cooking gas, firewood, kerosene, all bought at different market prices depending on the prevailing subsidy and scarcity level.


From my N216, 000 per annum, all these miracles happen, one expects productivity, I still keep a smile, and I keep mute when governors are granted bail for a mere N500million, after stealing billions, I watch House of Rep members take some N800-900, 000.00 every month.


I go through the hardship-they take the allowance. They speak English, I take the heat, I bleed and money disappears into their pockets.


Some of my mates that are slightly smarter outplay the system, they have two-three cars, they circumvent everything, they are able to afford three bedroom apartments at almost a million naira plus per annum and pay over 400, 000 for their three kids in highbrow schools and yet we earn same salary.


I go on strike, it means little to them because the truth is I rarely contribute to the system other than aiding and abetting.


Because rather than fight, ask questions, right the wrong in our little way. We wait patiently on goodluck, hoping against hope for the promotion to the next level for doing nothing.


I expect gratification, a cash-backed thank you or else I lazy around for the few hours I spend at work.


I treat my work with levity, it’s only a means of survival, I cheat the system, after all its government, and I take home stationeries meant for the office, justifying it because it was supplied at an inflated cost by Alhaji Ikechukwu Akindele Bookshop.


All sorts of reforms, promises and clichés, but sadly no result because the system itself is premised on a faulty foundation. Whether you bring in academics, politicians, or the so-called career civil servant, the result is still largely the same, more crooks are bred.


I end this story by asking really what is the value of N18, 000 in present day Nigeria, where utilities do not work, is it about N18, 000 or about creating a national reawakening, redefining ethics, building new bridges and mending lost trust.


Well it remains to be seem, my story is similar everywhere, very little difference, from Zamfara state where a five months old baby is on a local government payroll to Abia state that classified Imo state citizens as non-indigenes, ...Like the blind man that closed his eyes to sleep, when he was awake what did he see. Whether it is the people deceiving the leaders or leaders engaged in deceit, are we really ready for change. Only time will tell.