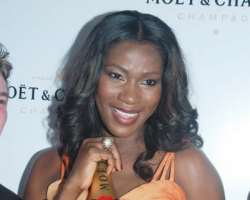 Just like a popular saying that the first house on a street is definitely not the most beautiful house on that street. This is the case... with alluring and ravishing looking actress Stephanie Okereke who took the bull by the horns recently by taking her Nollywood act to Hollywood with the preview of her first ever produced and directed movie titled 'Through The Glass'.

It could be said that the movie 'through the glass' is Stephanie's way of re branding Nigeria. It is a movie about Ada who taught Jeffrey,a foreigner, the many cultures in Nigeria. She taught him how to eat the Nigerian food and many things related to Nigeria. Stephanie used the movie to project possitive images of Nigeria.

Jeffrey (Garret Mckechnie an American actor) who lives the ultimate bachelor's life by going through numerous non committed relationships but struggles to excel at work and gain his father's love and acceptance. His life became more intriguing as life deals him a card that stops him in his tracks. He returns from work one day to find a note written 'take care of your responsibility' left on top of a baby who is abandoned on his door step. In a scary, confusing and comedic manner, he turns to his Nigerian neighbour, Ada (Stephanie Okereke) whom he has a secret crush on for help. The rest of the story tells what happened to the baby and if Jeffrey broke through the glass of his phobia for commitment and keep the baby, and if he confessed to Ada on the secret crush he has on her.

The movie which was all shot in the United states of America has as cast; Garret Mckechnie (Jeffrey), Ada (Stephanie Okereke), Matt (Brian Rose) and Nicole (Christy Williams).

The preview which was held at the Silverbird Galleria attracted the crème de la crème in the industry.

In a brief chat with the screen diva, Stephanie she speaks on what inspired 'Through the Glass', 'I just wanted to shoot a movie and I want to do it right and I felt that was an opportunity for me to do just that and I did.' She says.

On what makes her tick as an actress and what special things she does to prepare for her roles, Okereke responds, 'May be I just immerse myself in the characters I play and just give it all out. Could there have been any of the movies that portrays the real character of this pretty actress? She simply responds 'Not really but I know that we have a little bit of us in the movies that we play. Some people think that I cry a lot but I really can't tell. Maybe a little bit but not totally.'

She also mentioned that the film will be shown on cinemas at least for a couple of months before it will be out for sale on the home videos.

For Christy Williams, one of the cast who played Nicole in the movie, coming to Nigeria has been a wonderful experience and she has enjoyed every bit of her stay.

On his experiences in Nigeria, and how he feels being a part of ' Through the glass', Brian Rose, (Matt) says; 'I feel great to be in Africa and to be surrounded by good people, I am really having a ball'.

Brian who has been acting in the US for six years describes Stephanie as being a woman who is used to getting what she wants, she is just a dynamo he says.

While discussing some of the challenges gone through in shooting the movie, he says the only challenge was time. 'Normally in the states, we take three months or more to shoot the movie, but we had only three weeks or so to this particular movie and that was really challenging and difficult to fire everything in within that time but I think we did a pretty good job.' He did not also fail to mention that he has enjoyed his stay in Lagos. 'From what I have seen, all of these things are not true because since I have been around, I have not been kidnapped, I have not been anything but loved and everyone I have met has been wonderful. That is what I take back to the US.' he says.