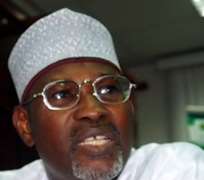 • Jega
Chairman of the Independent National Electoral Commission (INEC) Prof. Attahiru Jega is on the spot. It has nothing to do with the claims by the Presidential candidate of the Congress for Progressive Change (CPC) Maj-Gen Muhammadu Buhari that he cannot defend the outcome of the April presidential poll won by Dr. Goodluck Jonathan of the Peoples Democratic Party (PDP) neither has it to do with the nullification of some of the elections by tribunals in some states.

on December 3, 2011, the people of Kogi will go for the governorshhip election. Iheanacho Nwosu, looks at the preparations of the Independent Natioanl Electoral Commission (INEC) and the battle between the two leading parties, the Peoples Democratic Party, PDP, and the Action Congresss of Nigeria (ACN).

Instead attention is on Jega over the forthcoming Kogi governorship election. The exercise is slated for December 3,2011. Kogi election means a lot to the commission for two reasons. First, it will boost or dent the credibility of the commission. Secondly, it will be used by the public to predict the shape similar exercise in Edo, Bayelsa and Cross River states in 2012 will take.

Although several parties are fielding candidates in the Kogi governorship contest, four of them are, for now, dominating the space. They are Action Congress of Nigeria (ACN), All Nigeria Peoples Party (ANPP), CPC and PDP. Captain Idris Wada is for the PDP, Prince Abubakar Audu (ACN), Elder Itodo Okpanachi (ANPP) and James Ocholi, CPC.

Some developments have helped to cause attention to focus on the Kogi poll. The controversy that trailed the emergence of Captain Idris Wada as the standard bearer of the ruling PDP is chief among them. Former executive director of Afribank, Alhaji Jibril Isa was the candidate of the party but was replaced at a primary that was boycotted by several other aspirants who accused the state Governor, Ibrahim Idris of using his influence to grant undue advantage to his brother-in-law.

Isa is yet to give up the fight for the ticket as the suite he lodged at the Federal High Court in Abuja on the alleged illegality of the primary that produced Wada is fixed for November 23, just few days to the main election.

Other parties are not faced with such controversy but they have uphill tasks before them. One of them is overcoming the looming incumbency challenges.

How the election will be won and lost
The candidates of the four main parties-PDP, ACN, ANPP and CPC hail from Kogi East. The senatorial district is populated by Igala, the dominant ethnic group. They have equal advantage in terms of tribal affiliation. The parties made similar calculation in terms of choice of running mates as the candidates picked their deputies from Kogi West.

The implication of this is that greater energies would be deployed by candidates and their parties in getting the votes of the sympathy of Kogi Central. Whichever party that wins the zone is likely, at the end of the day, to win the election.

The results of the April elections for the house of assembly have convinced the parties that with free and fair elections they can post a good showing in the December outing. In the election, despite the PDP being the ruling party ,ACN and ANPP won constituencies like Kabba/Bunu. Yagba west and east among others.

The PDP , expectedly, has some advantages. Aside having a deep pocket to prosecute Wada's campaigns with less heat, it has strong structures at the grassroots with the backing of officials of local governments . All the councils are controlled by the party. Beyond the shores there is the federal might for Wada . His campaigns are attended by prominent government officials like the Vice President, Senate President, Speaker of the House of Representatives etc.

However, the greatest challenge facing the PDP candidate is the crack in the party. The aggrieved party members have not left anybody in doubt that they are not keen at mending fence with him. Unless reconciliation is quickly sealed, some party members may use their influence to scuttle victory for Wada.

Such situation had played out in states where there was deep division in the ranks of members of the ruling party. Aggrieved party members simply struct a deal with the candidate of the rival party and told their followers to vote for him. The scenario played out in Imo in the last election. It was also fingered as the reason for the defeat of Dr Segun Oni in the Ekiti rerun election.

Beyond what would likely be the outcome of the election, PDP and to a large extent Wada's fate lies in what the court will say on November 23. If the court rules in favour of Isah, it means that Wada would be out of the picture. It will also pose a huge challenge for the new candidate as it will mean that the PDP would have to redraw its campaign strategies and sell the new flagbearer in less than 10 days.

The man who is likely to reap from any faltering of the PDP is Prince Abubakar Audu of the ACN. He is regarded as PDP's major threat in the election. Like or hate him, Audu is a factor in Kogi politics. Agreed he has vied for the top position three times and failed in all, he is not one to brushed aside any day, anytime. His claim is that he won the elections but was rigged out by INEC.

Under the ANPP platform where the two time governor of the state prosecuted his ambition, he substantially raised the profile of the party and made it a major force. His decamping to the ACN is seen as a strategy to get stronger external backing from the likes of former Lagos State governor and leader of the party, Bola Tinubu and other ACN governors.

What the party will also afford is the opportunity to mobilise, like the PDP, well placed politicians from across the country to stage campaigns in the state capital for him. Audu is anchoring his campaign on his achievements while in power, feat he has robustly argued has not been met by Idris despite spending more than eight years in power. To a large extent the campaign is winning him the sympathy of some voters.

However, Audu's greatest drawback is the deadly attacks from his wife, who has been accusing him of not deserving to be elected governor of the state again. The woman is currently waging a legal battle against him in the United States of America.

Apart from the tackles from his wife, the former governor is regarded as an arrogant and self adulating fellow who care little about the feelings of the ordinary man. The PDP is highlighting this claim in its campaigns in addition to claim that voting for him was tantamount to selling the state. The allegation of corruption is coming from both parties. While Audu has consistently accused the Idris government of not giving good accounts of the huge resources that came to the state in the last eight years, the PDP administration is alleging that the ex-governor looted the state.

No doubt, Audu has the support of ACN leaders and is most likely to get lifeline from them for his campaigns, but there is doubt if he can match the PDP which has shown that it is not shy of spending.

The chances of CPC and ANPP in the election will depend largely on the mistakes of PDP and ACN. Nothing is ruled out in politics. What is not polemical is that the election will be decided by the Kogi Central which tribal make up is the Igbiras. The electorate in the zone will cue behind the party/candidate that is likely to make mouth-watering offers to them.

So far, non of the parties is accusing INEC of bias. The accusation however will come either before, during or after the election. But the commission will ultimately be judged not on the allegation (s) of politicians but on the hard facts that would be on the table about how the election was handled.