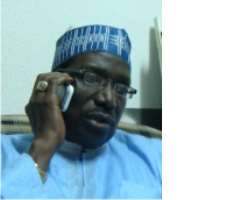 With the crisis in Nollywood persisting and its quest for perfection, veteran actor Akintunde Akinsola Ogunleye, otherwise known as Lord Williams - a role he played in DOMINO sometime ago, has said that Nollywood has a long way to go. In this interview, with Harry Idoro, Jnr. he speaks of his absence from the screen and other issues.

It's been quite sometime now since you last appeared on screen. Why?

Yes, I haven't been on screen lately, but let me, first of all, tell you about my background. I was actually into film and television production and directing. My role as 'Lord Williams' in DOMINO found me. I was in my office when a young lady, Salome, came in and said, "you are 'Lord Williams'", so, I asked "who is 'Lord Williams?' and she said I shouldn't worry about it and that the scripts would be brought to me. And that was a role a lot of big names auditioned for, but my name had been written for it from heaven.

Personally, I started in Hollywood, California in USA. My first role was a student project called Mr. Jay - It was a role that one of my classmates asked me to play. At first I thought I shouldn't do it because a Hollywood actor was supposed to play the role for my school, the University of California, Los Angeles (UCLA) right in the heart of Hollywood. That was where I did my postgraduate; my first degree was in Mass Communication, in Seattle, Washington. I was able to get to the programme because God wanted me to get there, because I was blessed and not lucky - you know, luck does run out. Then I said okay I will. And when I started I realised that it was work because it wasn't easy to be somebody else. It is something people are awarded PhD for. But here every Dick, Tom and Harry gets into it anyhow. In the film my bodyguard, Whitney Houston used six months to practise that role she played. This is why it is going to be difficult for a Nigerian movie to win the Academy Awards, unless they create one for Africa in grade two. We have fantastic actors like Kate Henshaw-Nuttal, Omotola and a few others, but generally they just act. I don't watch Nigerian movies, unless I find one of those people I mentioned and maybe a couple of other friends of mine that I may have offended. The United States movie industry emerged from radio, while the Nigerian movie industry is emerging from theatre. Theatre is bigger than life and, of course, radio and television is life. When I was doing my thesis which I did on Chinua Achebe's No Longer at Ease, I named it After the Light We Are No Longer at Ease and I got a young theatre H who won the best actor at UCLA that year, which was in 1982. As the director of the play, I got a young black American with a Yoruba name, Adisa, who was coming for the first time from theatre to television that he was playing Obi and not being Obi. And at the end he was marveled with what he did.

In Nigeria, we act, and we over-act. When you watch a foreign movie it looks like you are watching life, but when you watch our people, you can tell that this person is acting. The way you hold the hand set in real life and you hold it on TV, the camera will capture it, whereas our people try to hold the phone and make it so abrasive. I also acted in Roots: the next generation, as a drummer.

How many movies have you done apart from DOMINO?

None! Because the producers said they don't know what to give to me. They said, "we can't give a small role - you are Lord Williams, so, until the role that is as big as Lord Williams comes on, we don't have anything to give you." This is sad because a good actor can play any role.

In DOMINO, people say you were weak, considering the aggressive nature of 'Oscar', your son whom you don't seem to be able to control. What is your reaction to that?

I want to say that who 'Lord William' is not too far from who he is in real life. An ordinary person is an ordinary man; he is not a thinking person and does not have imagination. The stillness of the tiger is not laziness. An average person is a stupid person and he acts before he thinks; I think before I act in real life. The way I'm speaking to you now is the way Lord Williams speaks. But when the director was interviewed, he said what you see there is Akintunde Ogunleye and not Lord Williams. I had a brilliant director who allowed me to rewrite my script because I cannot talk or do the way the initial script suggested. Whereas in the old Hollywood and in Nigerian movie they tell you "just say the line", but this line has to come from your heart. Okay, Lord Williams take a lot of flak from his son, but don't make a mistake because he is still the father. That is why he says; "I am Lord Williams, I built this company, I made you, so, when push comes to shelve, Lord Williams is not a weak character. Don't forget, there was a line where Lord William's friend, Otunba , said; "you forget that your son is playing the script you wrote and that the sheep does not fall too far from the wall", and Lord Williams said "oh my God, Oh my God must you say that? That was me! But that goes with that saying of my grandfather - "that of all the diseases that trouble men in life, none troubles him more than the disease of youthful exuberance. Lord Williams used to be like him; he had offended a lot of people in his life and now that he is at this other end of his life, he is now sober, but when you push him… Like I used tell people, king Sunny Ade and I used to be very close and you see how he walks around and tell people yes, sir yes sir, but you try and step on his toe, then you will know you are dealing with Sunny Ade. That is who Lord Williams is.

What then is the link between real life and acting?

Now, in real life, as I said, I am not too far from who I'm. I'll think a lot because I will give you a long rope to hang yourself and by the time I explode you will not recognise me, but I give people the benefit of the doubt.

What do you think about Nollywood?

I do watch their movies here and there, but I watch mostly the Yoruba ones. I studied film; I studied the art of film making. There are languages in every business. Film has its own language, and it's not something you can take shortcuts. The so-called Nollywood producers are taking shortcuts and they are not going to win an award or capture the world. We are number two producer of movies in the world after India, but won't you rather do two good movies a year that can stand the test of time than do the wuruwuru. I said I watch Yoruba movies not because I'm tribalistic, but because I love the deep language. And as far as Yoruba movies are concerned, they are also doing injustice to the translation. I remember as a kid we used to go and watch Indian movies and the translation would even make you laugh. But in Nollywood they try to condense translation and lose the flavour of what the movie is actually saying. Nollywood is something we call movie making in Nigeria, it's not really a village. Hollywood is a physical place, I used to live there. I'm not saying I'm better, but I spent eight years to learn how to act movies. You cannot just wake up from selling okrica and say you want to direct a movie.

You can divide film directing into two: coaching and directing. Coaching is what most directors do. The first thing you do as a director is to first of all interpret the script; what is this movie saying; what do I want to get out of it. So, by the time the actor gets on the set, he is ready to go because he has learnt his trade. I think part of the fault is from the producers, they are not looking for professionals, rather they are looking for who they can do something with and put in a movie. Though, there are serious actors and actresses in Nigeria, unless they go through the training, I am sorry the situation will not improve.

Given the opportunity how would you restructure Nollywood?

First, I will change the script, because everything starts with scripting. Now, you and I have been talking, how many big words have we used. Most of these people don't know how to write scripts. There is a niece of mine who lives with me and loves watching Nollywood movies, so after feeding my eyes sometime, I get up and leave. Now, these things we are bring out of Nollywood, how much effort do we put into it. We need to take Nollywood from commercial to art.

What have been your achievements so far?

Well, I want to give a lot of kudos to Professor Ross, who taught me television production. Before I finished my post graduate studies, I got my first job as a representative, sub-prefabricated housing all over Africa. So, I got to the professor and told him about the job and that they pay well, but my interest was in acting and he said: "What is your education worth?" What I'm doing today is a calling - my specialty is youth. I told my family, if I have one breath left in me, I would like to be wielded in front of a school, and let me say it to them that life is too short and youth is the most deceitful part of life. I would like to tell them not do some of the things I did when I was a youth.