U.S. And Russian Crew Blast Off Safely For Space Station 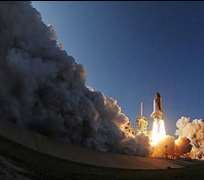 Three astronauts blasted off on Monday to return a full crew to the International Space Station (ISS) as Russia seeks to restore confidence in its space program after the crash of a cargo spaceship and several botched launches.

The launch at 0414 GMT was the first since NASA ended its 30-year shuttle program in July, leaving a gap of several years when the 16 nations investing in the $100-billion space station will rely solely on Russia to ferry crews.

"The spaceship has reached orbit," Flight Engineer Anton Shkaplerov said in a radioed message to the cavernous Mission Control center in a northern Moscow suburb. Applause broke out as the crew flashed a thumbs-up signal to onboard cameras.

The mission had been delayed since September over safety fears after an unmanned Russian Progress craft taking supplies to astronauts broke up in the atmosphere in August, one of the worst Russian space mishaps in decades.

Veteran NASA astronaut Daniel Burbank is making his first voyage on board a Soyuz spacecraft from Russia's Baikonur launchpad in Kazakhstan, while cosmonauts Shkaplerov and Anatoly Ivanishin are making their maiden space voyage.

The crew shrugged off safety concerns before their craft lifted off from a snowbound Baikonur, blazing a bright orange trail through the overcast sky above the Kazakh steppe.

"We don't have any black thoughts. We have faith in our equipment," Russian news agencies quoted Shkaplerov as saying before the launch.

Reporting back to Mission Control after take off, he said the crew was "feeling good." A small stuffed bird from the mobile app Angry Birds, a mascot given to Shkaplerov by his five-year-old daughter, hovered above the weightless crew.

"Except for the bad weather in Baikonur, everything went extremely well," Vladimir Solovyov, head of launches for the Russian segment of the ISS, told reporters at Mission Control.

After a cramped two-day journey aboard the Soyuz TMA-22 capsule, the crew will dock with the space station on November 16, overlapping briefly with station commander Mike Fossum of NASA, Japan's Satoshi Furukawa and Russia's Sergei Volkov.

Any problem in reaching the ISS could leave the space station empty for the first time in more than a decade when the current three-man crew returns to Earth later this month.

REPUTATION
Russia's space agency chief has said the August 24 failure of the Progress rocket launch was an "isolated" glitch caused by a fuel pipe blockage.

But it added to a string of failures that marred this year's celebration of the 50 years since Yuri Gagarin's pioneering orbit and pointed to deeper troubles with Russia's space industry.

Moscow hopes a smooth mission will begin to restore its reputation after more trouble this week when a launch touted as post-Soviet Russia's interplanetary debut went awry.

Russia is likely to have lost the $165-million Phobos-Grunt probe, which is stuck in orbit and may drop to Earth after it failed to set a course toward Mars's moon on Wednesday.

Vladimir Popovkin, head of the Roskosmos space agency, said Russia had not yet managed to contact the craft. The agency had only seven-minute windows in which to work every time Phobos-Grunt orbits Earth, he said.

By early December, Roskosmos will give up on the craft when the launch window closes for setting it on a course toward Mars, Popovkin was quoted as saying by Itar-Tass news agency.

Gradually losing altitude on its perilously low orbit, the 12.5-tonne spacecraft is expected to plummet to Earth in January, Itar-Tass quoted him as saying. He added that it posed no threat and would burn up entirely on re-entry.

Botched launches have also lost Russia a high-tech military orbiter, a costly telecommunication satellite and set back plans for a global navigation system to rival the U.S. GPS.

While NASA suffered the tragic loss of crews on its Columbia and Challenger shuttles in 2003 and 1986, Russia last suffered such an accident in 1971, when three cosmonauts died on their way back to Earth on the Soyuz-11 mission.

This year the United States turned over all crewed flight responsibilities to Russia until commercial firms can offer space-taxi rides.

NASA is seeking $850 million to help U.S.-based private companies develop human orbital transport capabilities with the goal of breaking Russia's monopoly on ferrying astronauts to the space station before the end of 2016.